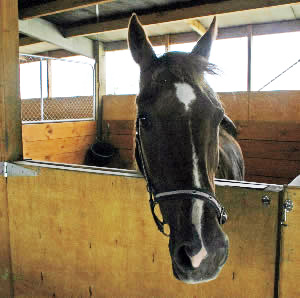 The Polish researchers from the University of Warmia and Mazury observed the behaviour of horses while they occupied stables with the three different bedding materials – straw, crushed wood pellets, and a mix of peat moss with wood shavings.

Factors which were assessed as showing a state of comfort included standing at rest, engagement with the bedding and time lying on it, while undesirable behaviour included box walking, biting the bars, kicking the box, and aggression toward the horse in the neighbouring stall.

It was found that the horses engaged significantly more with the straw bedding and spent shorter periods standing.

“The longest total time spent on recumbancy was observed during usage of straw,” Professor Dorota Witkowska and her colleagues reported in their study, published online this week in the Journal of Equine Veterinary Science.

“Except for ‘neighbour threatening’, the undesired behaviours appeared the least frequently during usage of straw.

“Also, the smallest percentage of horses manifested undesired behaviours when the straw bedding was used.”

They continued: “It was concluded that straw bedding was the best in terms of fulfilling the behavioural needs of horses staying in boxes.”

Witkowska was joined in the study by Agnieszka Kwiatkowska-Stenzel and Janina Sowińska.