A new online area for Olympians and other elite athletes has been launched by the International Olympic Committee (IOC).

The Olympic Athletes’ Hub was redesigned in a move to strengthen support to athletes as outlined in Olympic Agenda 2020, the IOC’s strategic roadmap for the future of the Olympic Movement that was adopted in December 2014.

The new Olympic Athletes’ Hub will continue to showcase the best social media content being created by Olympians around the world – all in one convenient location. The official accounts of more than 6000 Olympians can already be found on the site.

The web-based platform is available for download as a mobile application for android and iOS. Although the target audience is athletes, the platform is also available to team officials, coaches and the general public.

Just over 30 Olympic equestrians are already on the site.

The Hub is a digital one-stop-shop where athletes can learn about and share their own experiences on important topics related to their careers on and off the field of play. Special focus is placed on the protection of clean athletes from all sorts of manipulation, in particular doping, competition manipulation and related corruption. Another important topic is the health of athletes and how to avoid injuries and illnesses, as well as the prevention of harassment and abuse in sport. The Hub also includes information about athletes’ career programmes and much more.

“Strengthening the role of the athletes is one of the top priorities of the IOC as emphasised in Olympic Agenda 2020. The Athletes’ Hub helps us improve support for the athletes and communication between them. I wish such an opportunity had been there when I was an athlete,” said IOC President Thomas Bach.

IOC Athletes’ Commission Chair Claudia Bokel describes the Olympic Athletes’ Hub as “the IOC virtual home for all athlete content”. She said the creation of the hub was a direct result of Olympic Agenda 2020.

“The IOC is committed to supporting athletes on and off the field of play. The Olympic Athletes’ Hub is a tangible example of this, which we hope that athletes will find useful, fun and informative,” Bokel said,

Athletes who sign up to the Hub can access content tailored to them, including special offers from The Olympic Partners (TOP) and other Olympic Movement stakeholders. 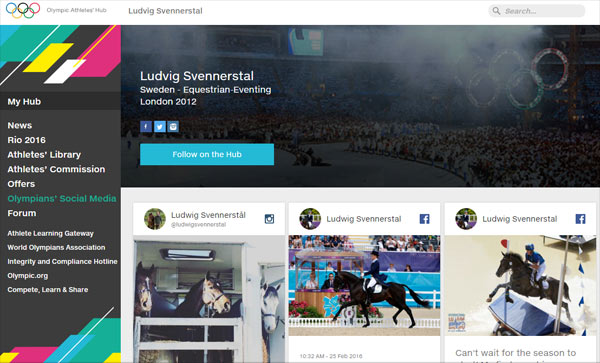