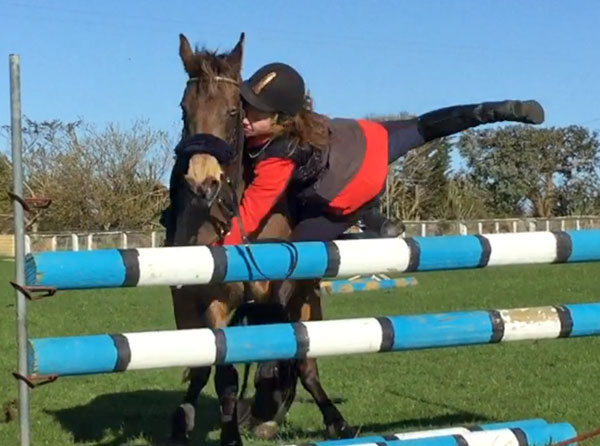 An online survey of 2572 equestrians in Germany has been used to put a series of horse-related safety hypotheses to the test.

The German researchers explored 23 variables in their survey, finding that 17 of them exerted a significant influence on the protective behaviour of riders. They have outlined their findings in the journal, Animals.

Their survey was open to participants for six weeks in the middle of last year. It was subsequently found that 5.2% of respondents were male and 94.8% were female. The average age was 32.5 years, and 21.4% of them had one or more children.

Overall, they found that the strongest influence on the safety behaviour of German equestrians centred around whether they had a positive or negative attitude toward safety products. Another important factor was the protective behaviours of other horse owners and riders at their stables.

The research team, Christina-Maria Ikinger, Jana Baldamus and Achim Spiller, from the Georg-August University of Göttingen, used the survey to test a series of safety-related hypotheses.

Here are their hypotheses and their findings:

They detected no significant effect of gender.

The results only confirmed the second hypothesis. The finding that young riders tended to be a high-risk group and wore helmets more often seemed to be reflected in their safety behavior, the researchers noted. However, whether this behavior was self-imposed and possibly influenced by a high risk perception on the part of the young riders or otherwise mandated by parents or trainers remained to be clarified.

The results confirmed that adult riders with children were more safety conscious than those without children.

The results failed to confirm that novice equestrians had a more pronounced safety behavior compared to more advanced or professional riders, although the results did confirm that, in terms of years of experience, the more experienced riders showed a less pronounced safety behavior. This finding may have several causes, they said. Firstly, more experienced riders may have had some minor accidents in the past and were underestimating the risk for more serious injuries. Also, it could be that, as experience increased, the control over the horse would improve, which might in turn lead to a false sense of security, they suggested.

The results confirmed that showjumpers, eventers and dressage riders showed more pronounced protective behavior. The hypothesis around Western riders was formed because studies have pointed to the less frequent use of helmets, resulting in a negative effect on the overall protective behavior. The survey results could only partially confirm the hypothesis in relation to recreational riding. It was clear, they said, that there were huge variations between the leisure-oriented riding disciplines and their respective safety behavior.

This was supported by the survey findings. Other horse owners and riding pupils from the stable were found to be an important influence on others. They were assessed to be the second-highest influence overall, which the researchers said provided a valuable starting point for the promotion of safety behavior.

Both were supported by the survey data. A positive attitude exercised a positive influence on protective behaviour and a negative attitude exercised a negative influence. The positive attitude had the highest impact overall and the negative attitude had the third-largest influence. The attitude towards safety equipment seemed to represent a key aspect when trying to increase the use of safety products, they found. Producers of safety equipment and horse sport associations should continue to try to find out more about the underlying reasons for these attitudes to identify potential enablers and barriers, the study team suggested. Deficient design, untraditional appearance, lack of comfort, and doubts about the effectiveness of safety products seemed to be major reasons for rejection.

The survey results only confirmed the second hypothesis. The researchers cited previous research which showed that equestrians generally believed they could control horse-related risk. Future research projects needed to scrutinize this assumption, they said. Perception of the level of danger associated with equestrian activity in general and specific riding situations positively influenced the protective behavior patterns reported by equestrians. This relationship engendered a responsibility of horse sport associations to educate their members about the inherent horse-related risks to produce more safety-oriented behavior in equestrians, they suggested.

Discussing their findings, the study team noted that the relationships between the respective variables were quite complex.

“The results show that the attitudes towards safety products as well as the protective behavior of other horse owners and riding pupils from the stable are key aspects in altering the safety behavior of equestrians.

“The obtained outcomes could help horse sporting associations, politicians, and producers of horse-related safety gear find additional starting points for the promotion of risk preventive behavior and identify important high-risk groups that should be made more aware of the various advantages of protective gear.”

Their findings, they said, may also inform other high-risk sports administrators seeking promotion of more pronounced safety behavior in their participants.