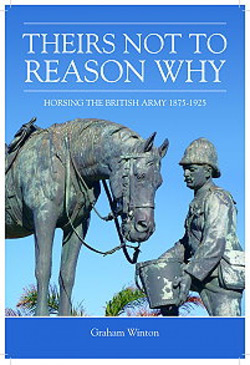 Theirs Not to Reason Why shows how a major imperial power, Great Britain, outfitted its military with the vast numbers of equines needed to prosecute the Anglo-Boer War of 1899-1902 and the Great War of 1914-1918 and how that military trained, maintained, and deployed those equines in the field. Not about horses, cavalry, or mounted warfare as such, the book instead offers a comprehensive and thorough study of the politics, economics, and, principally, logistics of “horsing” the British military for and during two major wars at a turning point in the evolution of mounted warfare.

When we think about modern mounted warfare, we typically conjure cinematic images of hell-for-leather cavalry charges at full gallop, lances lowered or sabers drawn (think Errol Flynn in The Charge of the Light Brigade), or of close-quarter cavalry skirmishes featuring deft equitation and deadly service revolvers (think Charlton Heston in Major Dundee). We rarely pause to remember (though War Horse reminds us) that warhorses primarily were workhorses, providing transport, traction, and mobility for all three military arms — infantry, artillery, and cavalry — through centuries of modern European warfare up to and including the Great War and even into the Second World War.

Equines were the source of military (and civilian) energy: they transported men and hauled supplies, materiel, and munitions to battle; maneuvered artillery and its accouterments from site to site during battle; and, of course, served as cavalry chargers and troop mounts for men in battle. Horses and mules made modern warfare possible and the waging of it successful — often despite inept military leadership. As Field Marshall Douglas Haig — commander of the British Expeditionary Force on the Western Front — observed: “if in March 1918 the equine force of Germany had been on the same scale and as efficient as the British equine force,” then Germany might have won the war. Note that Haig, a veteran cavalry officer, was speaking of equines, not cavalry.

How the British military mustered its equine force with efficiency and on a vast scale twice, for two major but very different wars, makes an absorbing story. How the animals in that force fared makes a heartbreaking one. Winton unfolds the story in three well-organized parts: 1) plans and preparations prior to the Anglo-Boer War (including the creation of central veterinary and remount services) and the conduct of the war; 2) plans and preparations before the Great War, principally solutions to “the Horse Question” — how to move from peacetime to wartime equine establishments in a short time and in large numbers; 3) equine mobilization in August 1914, events of 1915-18 as related to the horse services, and equine demobilization in 1918-19.

“Essentially a ‘horse war’,” the Anglo-Boer War, “swallowed horses as a modern army swallows petrol.” The recently formed Army Veterinary Service (1881) and Remount Service (1887) lacked strong organizations and clear missions and failed to coordinate their efforts properly. In Winton’s words, they “were totally unprepared and unsuited [in 1899] for the responsibilities expected of them.” As a result, they failed to prevent the “tragic waste of animals” that became a national scandal. The military had purchased 669,575 horses and mules for the conflict in South Africa (and acquired several thousands more through other means). More than 377,000 of them perished. (All numbers cited in this review are Winton’s.)

Shortly after, British military planners stared down the barrel of a second conflict — one of unknown scale, scope, or duration — and resolved not to repeat the debacle of 1899-1902. They knew that motorized traction and transportation now would play an important role, but they also knew that victory still would depend on equines. They strengthened the relationship between the veterinary and remount services, introduced multiple horse and motor vehicle subsidy schemes, and created policies for the impressment of equines and vehicles alike. To enable informed planning, the War Office conducted a census in 1912 for counting and classifying the national herd. It found some 590,000 horses suitable (though not necessarily available) for military service — unfortunately, these included more heavy draft horses, and far fewer light horses “of the hunter type,” than needed.

The War Office faced the daunting challenge of preparing for initial mobilization and ongoing supplying and resupplying of equines in unprecedented numbers, in multiple theaters, for a period longer than anticipated. It had to balloon the peacetime establishment of 20,000 equines, almost immediately on declaration of war, to an initial wartime establishment of 160,000. Unlike continental armies with state breeding programs, moreover, the British army depended on the civilian market — domestic and foreign — for its equine force. Over the duration of the conflict, the Remount Service purchased about 1,248,000 horses, 468,323 in the United Kingdom and about 780,000 from abroad (703,705 of the latter from North America). Thousands perished in transit — 13,724 alone were lost at sea crossing the Atlantic, often victims of German U-boats.

The overall wartime “wastage” of British equines (loss by death, sickness, casting, or other causes), though proportionately lower than in 1899-1902, still totaled a staggering 529,564 animals. (France, Germany, and Austria lost some three million of the six million equines they collectively fielded). The equine mortality rate in British service fluctuated considerably, with an overall average of 14%. The horrific numbers would have been far worse had the Army Veterinary Department not established 70 veterinary hospitals, most of them abroad, that collectively admitted some 725,216 horses and cured 529,064 of them. At the end of hostilities on November 11, 1918, the British army held 896,000 animals, a number greatly exceeding the needed postwar establishment. As a result, “some 791,696 animals … had to be quickly disposed of, as humanely as possible,” a process that Winton treats with uncharacteristic, and somewhat unbecoming, brevity.

Written by a military historian primarily for military historians, Theirs Not to Reason Why must be approached on its own terms in both substance and tone. It is based on exhaustive and meticulous research in primary archival sources and secondary published sources — research collected and organized with a high degree of knowledge and skill and presented with keen intelligence. Exemplary in those aspects, the study nicely complements recent works such as Stephen Badsey’s Doctrine and Reform in the British Cavalry 1880-1918 (2008) and David Kenyon’s Horsemen in No Man’s Land: British Cavalry and Trench Warfare 1914-1918 (2011).  It adds true value to the scholarly conversation on its topic.

Precisely because the book is scholarly and highly specialized, it also will strike different audiences very differently. The primary audience — professional and amateur students of modern warfare, particularly as practiced in Great Britain — will find it a judicious account, told with scrupulous objectivity, and filled with highly detailed information and valuable data. Other audiences — including general readers in the horse community — more likely will find it a glacial narrative, told from no discernable point of view, and packed with tiresome minutiae and statistics. Historians of the subject will want to read the book from beginning to end. Others will find reading in the book more rewarding than reading through it.

Theirs Not to Reason Why boasts abundant virtues, but it also has flaws. It presents a “big picture” with shape and scale, but without sharp lines and clear shading: the reader too easily can lose the forest for the trees, and the trees for their leaves. The book also suffers from unnecessary length (500+ oversize pages with small type) and untold grammatical and typographical errors. Aggressive editing could have shortened the book without loss of substance, and capable copy-editing and proofreading would have produced a much cleaner text.

Theirs Not to Reason Why, in sum, rewards its reader with a compelling story, a wealth of outstanding research, and a comprehensive and thorough recitation of facts. It might have enhanced those rewards with a more dynamic narrative strategy, more engaged analysis and interpretation, and more sorting of facts by degrees of importance. An extraordinary resource, it could be a better read.

Graham Winton’s lifelong interest in and study of military, social and landscape history has given him an understanding of military horses and their supply. He has had several articles published on horses in the First World War, mechanisation and army transport system. “Theirs Not to Reason Why”: Horsing the British Army 1875-1925 is a culmination of many years of research and experiences. He has organised many study tours to the battlefields of World War One, taking veterans back to France, often for their first time. As a result, he has been privileged to spend time with them and listen to their memories of horses and the landscapes over which they operated. Having had experience of carriage driving, working with heavy horses and riding over several battlefields, Winton can combine a detailed knowledge of historical materials and sources, with a practical understanding of horses in the landscape. He retired in 2008 as Principal of a College of Adult Education to concentrate on research, publishing and tutoring. He is a part-time tutor with the University of Cambridge Institute of Continuing Education and has lectured in the USA and extensively in England. In 2013 he was made a Fellow of the Royal Geographic Society.