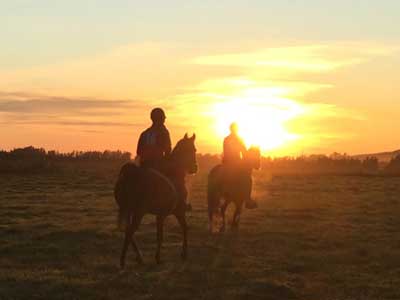 The FEI’s endurance director, Manuel Bandeira de Mello, is understood to be in Abu Dhabi as the world governing body pushes for endurance reforms in the United Arab Emirates (UAE).

His arrival follows a meeting last week at FEI headquarters in Lausanne, Switzerland, with members of the Emirates Equestrian Federation to discuss the endurance issue.

The FEI is hoping that the UAE will adopt rules similar to those adopted at Sheikh Sultan Al Nahyan’s endurance facility at Bouthieb.

The local rules are designed to keep speeds, which are GPS-monitored, down to 20kmh. The majority of prize-money goes to the best-conditioned horses, judged on the accumulation of scores from each vet gate.

The results have been stunning, with only a handful of horses requiring moderate veterinary assistance among more than 1000 which have competed under the rules so far.

Bandeira de Mello, in a statement last month, acknowledged the six fatalities that had occurred in UAE endurance up to that point.

“It is abundantly clear,” he said, “that speed is a major factor in these incidents and that it is necessary to introduce measures to slow down the horses in order to reduce the number of catastrophic injuries.

“The FEI is in urgent discussions with the Emirates Equestrian Federation and individual event organisers to introduce similar protocols to those used so successfully at the recent event in Bouthieb to reduce the speed.

“Clearly, the FEI views any equine fatality as an extremely serious issue and post mortems are always carried out to establish the cause of death.”

Bandeira de Mello said official vets were now eliminating more horses at the vet gates, meaning that the completion rates were lower, but this had not yet reduced the level of catastrophic injuries at national events.

The Bouthieb iniatives have the ability to remove the frenetic on-course activity seen in UAE endurance, with support crew members running on to the course with slosh bottles. This appears to be result of the ongoing application of emergency crewing measures allowed under FEI rules, but intended only for extreme weather circumstances.

The Bouthieb rules have official watering points every kilometre, these being the only points where crewing is allowed. The final crewing point is 2.5km from the finish.

Endurance in the UAE has been the subject of controversy for years, with fast desert courses, jockey-style riders, and high stakes proving to be a problematic combination.

Problems around rule enforcement and welfare led to the FEI suspending the UAE from the world governing body last March.

A deal was announced a few months later in which the UAE promised to abide by FEI rules, during which it would be carefully monitored.

However, the FEI’s rules have yet to reduce fatalities at a national level, speeds are still too high, and fields continue to be followed by a fleet of crew support vehicles.