Bouthieb continues to be an oasis in the tough world of desert endurance racing in the United Arab Emirates.

The Bouthieb endurance facility in Abu Dhabi is owned by Sheikh Sultan bin Zayed Al Nahyan, who has spearheaded stringent local rules designed to safeguard the welfare of horses.

Speeds must be kept in check and are monitored by GPS. Bouthib particularly rewards the conditioning of the horse over speed, which is reflected in the distribution of prize money.

The results have been stunning in terms of horse welfare, amid growing concerns that the FEI rules being enforced in endurance across the rest of the UAE are failing to adequately safeguard horses. There continue to be horse fatalities and non-completion rates remain worryingly high.

The FEI has acknowledged that speed appears to be a factor in serious breakdowns in endurance horses and has urged UAE endurance officials to consider embracing the endurance concepts espoused by Sheikh Sultan.

An FEI four-star judge and technical delegate, François Kerboul, has provided a fresh update on racing at Bouthieb, saying the new rules had so far been implemented at three events totaling eight competitions, covering a period of 23 days. Racing had so far involved 1077 horses.

Of that number, only five horses required what he termed significant care, but their lives or athletic futures were never in jeopardy. “These horses all left the clinic in the afternoon.”

Kerboul, who has helped in the introduction of the new rules at Bouthieb, described the veterinary results as unprecedented.

“This dramatic decline in the number of horses requiring unavoidable clinical care, this disappearance of horses who died of exhaustion or were put down because of fractures, is certainly the most important and most visible consequence of the revolution taking place in Bouthieb,” he said.

But he said the veterinary aspect was only part of an ongoing broad programme at Bouthib to tackle the issues in endurance.

He said the difference on the track was “as different as night and day”.

“The cars have access only if they have the badge (authorization) that was given to them. Their number is limited to one vehicle for five horses per trainer.

“In order to ensure effective control, the badge is not a small discreet label that gets stuck in a corner of the windshield and that the stewards or the police will have no time to read, but a big sticker which does not allow fraud.

“The riders’ track is lined with linear mounds prohibiting crew vehicles to mix with horses and cross their path.

“Cars drive on the right or the left track, in principle, depending on the wind so as not to disturb the horses with dust.”

Kerboul said it was the third year that this provision had been introduced in Bouthieb, but it was only a first step because they were thinking of improving the tracks by making them more technical and separating them from vehicle assistance for the next season.

“The contact points (crew points) would then only be water points, as in the rest of the world.

“Riders would be even more responsible, being no longer practically guided by their trainers. This can only be beneficial for the horses as by becoming more independent, riders will be more responsible and will certainly be more attentive to their horses.”

He continues: “The prohibition of continuous watering and the creation of water points has put an end to the dangerous and unreasonable 4WD race-cutting and intersecting the trajectory of the horses at the mercy of the crews’ fantasies.

“We no longer see 10 4WDs for one horse slaloming five or six abreast and watering continuously throughout the track.

“Now, if the crew cars still follow the horses along the track, they take the lead to stop at water points, currently every kilometre, where the grooms are waiting with bottles.

“While I was on the track at such points I had for the very first time the intimate feeling of being at an endurance competition such as it exists everywhere else in the world rather than in the middle of a kind of insane gymkhana where only speed matters for the sake of speed, at the expense of the essentials – namely, the welfare and preservation of the horses.”

Kerboul says the two shots below say more than any words.

“Both were taken at Bouthieb at the end of a competition and on the eve of another. The first image was taken during the last season, the second in January 2016.”

Before the latter event, strict instructions were given: no more empty bags of ice lying around and nothing except water tanks for the next day.

“The instructions are permanent and apply throughout the competition,” he said. White bags of ice thrown around and trampled are no longer acceptable.

“Their contents have to be poured into bins or containers before the event. It is part of a system of education in which whatever you feel like doing is no longer acceptable and the image of the competition and its venue come into play.”

Now, he said, rules around the grooming area are enforced.

“There is clearly an inside and an outside. This allows more effective control of the five-assistants-per-horse rule. Even if this is not yet observed 100%, it is being rooted in the minds with the help of the organizers and ground jury members, and the difference with what was practised before is obvious.”

Racing at Bouthieb is heavily monitored through a network of high-definition closed-circuit television cameras, which provide their feeds into a monitoring centre.

“This network covers the whole vet gate area, from arrival to departure lines, including the grooming area, the inspection area with its trotting lines, rest areas and even the approach area of arrival and a few metres after the start.

“Everything is recorded and the operator in charge can enlarge any image and zoom on it as much as technology allows.”

Aside from monitoring events in the field of play, the footage will be invaluable for analysing the weak and strong points of the new rules, he says. 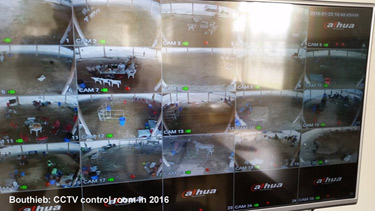 Kerboul says there have been some interesting consequences of Bouthieb’s rules.

“For example, we saw the number of [race] retirements increase significantly without the prior causes appearing clearly.

“After questioning the competitors concerned, we discovered an unexpected consequence of the new rules: given that the prize allocation is 30% for the traditional classification and 70% for the points classification (reflecting the good condition of the horse and its good management), we now see trainers withdraw their horse correctly classified for the speed ranking but poorly ranked on points.

“Although being considered fit to start for the next loop, they know that the main prizes will be lost and they see no reason to continue, even though in the ‘traditional’ context they would have continued without hesitation, possibly risking to ride their horses hard to win.

Trainers, he said, were pleased with the potential for extending the career of endurance horses that the new rules provided.

“We hear these same trainers say that slow but tough horses – and condemned to always losing – suddenly now have a future thanks to the new rules.

“Thus we were able to see horses always in the bottom ranks emerge in the first 10. This partially modifies the rules of the market without a doubt because the requested qualities for winning are now not really the same as before.”

“If during the next season, the design of the tracks is less flat and more technical – and the site of Bouthieb with its dunes permits it – that interest can only grow with time.

“But we still see too many riders passively awaiting the orders of their trainer instead of managing their own rides.

“They arrive near the finish line and start going in circles to cross it when their time gives them the maximum number of points. It is a kind of misuse of the rule by non integration or a misunderstanding of it.

“A new explanation of the goals of the game accompanied by a tight control should be established to counter that bad habit.”

He says a growing number of riders are regulating their speed on the track, which is good for the welfare of the horses.

Kerboul says the new rules encourage a different way of competing. The reorientation of prizes, rewarding condition more than speed, had undeniably helped the horse and those behind the reforms are determined to press on.

“It is not possible to stop what gives such good results regarding the welfare of the horses.” This, he says, must come before any other considerations.

Kerboul reports that the FEI hoped to discuss with UAE endurance officials whether rules similar to those in Bouthieb could be used across the country.

“We hoped, and so did Sheikh Sultan, for an official reaction from the FEI, but we did not think it would occur so rapidly after the very first implementation.”

He says he hopes the pioneering rules of Bouthieb will have a lasting positive impact on the future of the discipline.