The impact of repeated sports concussions is in the Hollywood spotlight with the release of a movie starring Will Smith and Alec Baldwin.

The movie Concussion was released on December 25 and is described by Sony Pictures as a “dramatic thriller”. It is the story of a neuropathologist’s discovery of a football-related brain trauma known as CTE — chronic traumatic encephalopathy, a disorder caused by repeated blows to the head. 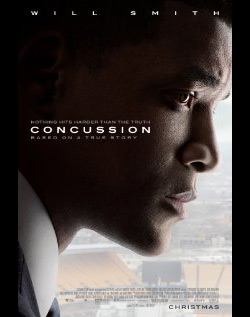 Nigerian born forensic pathologist Bennet Omalu examined the brains of several deceased NFL players and was the first to publish findings of CTE in American football players. He later became chief medical examiner of San Joaquin County, California, and is a professor in the University of California, Davis, Department of Medical Pathology and Laboratory Medicine. The movie documents his battle to have his findings taken seriously

Clark Elliott, an associate professor of artificial intelligence at DePaul University in Chicago, and an expert on the cognitive aspects of concussion, says the movie has raised discussion about concussion, “but only touches on the tip of the iceberg”.

“Concussion can happen to anyone. It can be a catastrophic injury, affecting us down to the very core of our ability to think, and sometimes, leaving us feeling alienated from the rest of the human race,” he said.

Elliot knows more than most the effects of concussion, and has documented his own experience from the moment of impact to his remarkable recovery almost a decade later in his book The Ghost in My Brain: How a Concussion Stole My Life and How the New Science of Brain Plasticity Helped Me Get it Back.

“Concussion is an epidemic in the United States, with more than 5000 cases reported each day and 6 million identified as living with the long-term effects of brain damage,” he said, citing statistics from the Centers for Disease Control and Prevention.

“We have a cheap simple neuro-optometric test available to us that could provide a great deal of information about concussion at all levels of sport … but we aren’t using it,” Elliott said.

“Recent research suggests that for every sports concussion we know about, five more go undetected, raising the horrifying specter of our young athletes continuing to play with brain injury. Using simple reading tests such as King-Devick, and other cheap instruments we can detect the majority of these potentially horrendous injuries. The key is baseline testing of not just those who receive injuries, but all athletes before, and then during the season, with traditional follow-up when indicated.

“Using this critical information, along with a basic understanding of the potentially catastrophic consequences of brain injury, parents, college athletes, and professionals should be free to make their own choices about their futures,” he said.

Elliott earned his doctorate at Northwestern University in Evanston, Illinois. His research area is artificial intelligence models of emotion. He teaches AI and cognitive science at DePaul University, and founded the nation’s first graduate program in distributed systems.