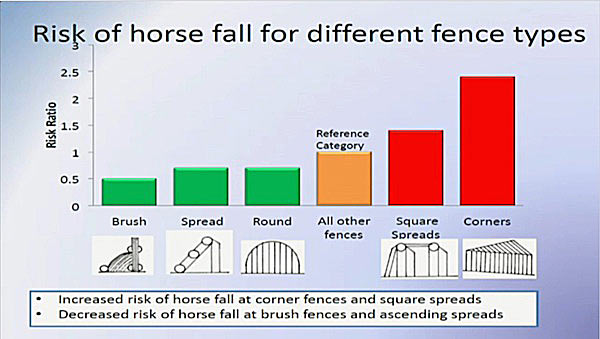 An eventing audit has identified several risk factors in cross-country horse falls, including the surprise finding that falls are more likely at fences fitted with frangible pins.

The results of the audit, led by the former director of England’s Ascot Racecourse, Charles Barnett, was presented to delegates at last week’s FEI General Assembly in San Juan, Puerto Rico.

The audit was based on information taken from the FEI database for events between July 2010 and December last year.

The data covered a total of 2,184,489 jumping efforts across one-star to four-star events, with the number of horse falls totalling 1180.

Barnett said it appeared that rider experience was a contributing factor in falls and wondered whether some riders were proficient enough to be competing at the highest level of the sport.

Looking at three and four-star events, Barnett identified a higher percentage of falls for lower-category riders, with category A riders least likely to fall. The highest numbers of falls was in category C. Overall, there was a decreased risk of horse falls among higher category riders at these levels, which was found to be independent of any other factors.

However, the risk of a horse fall at championship level was almost twice that compared to a standard competition, which, again, was found to be independent of all other factors, such as event level, venue or rider category. 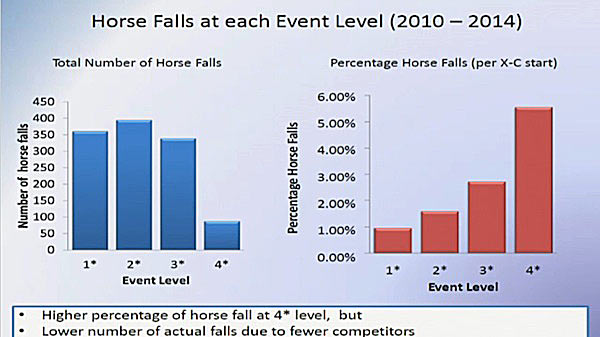 Barnett stressed, however, that more control data was necessary before any firm conclusions could be drawn.

The audit also identified greater risks from downhills fences, which were found to be roughly 1.7 times more likely to generate a fall than level or uphill fences.

Water jumps also generated more than their fair share of falls, compared to those that did not involve water. However, although there was a high risk of a horse fall for fences jumped into water, the risk of rider injury was found to be lower.

He proposed that there should be photos of all fences and that head cameras should be worn by fence judges.