Johan Dejager, a Belgian industrialist, show jumping enthusiast, and sponsor of Tour Jumping of Antwerp, has assembled a distinguished private library of rare books on horsemanship. Totaling some 364 books, 19 manuscripts, and 52 works of one or more series of fine art plates, the collection spans nearly four centuries and several European countries. It features early treatises and manuals — “nearly all of the great horse books published in Europe in the first two and a half centuries after the invention of printing” — and then shifts, beginning in the middle of the 18th century, “mainly to beautifully illustrated books and famous series of plates.” 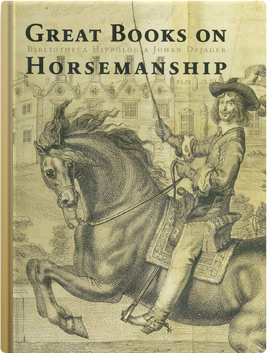 Great Books on Horsemanship thoroughly catalogues Dejager’s stellar collection in 784 pages illustrated with 1029 well-chosen, high-quality plates. Nicely described by Dejager in his introduction as “a reference work in the guise of a coffee table book,” Great Books primarily comprises a serious and exacting scholarly bibliography executed by Koert van der Horst, former curator of manuscripts at the Library of the University of Utrecht. Organized by century and country, the bibliography, like the collection, emphasizes four principal areas: horsemanship, veterinary medicine, cavalry, and horsemanship in art.

Great Books opens with a scholarly essay on each of those areas. Though broad in scope and accessible to non-specialists, the essays achieve focus, specificity, and weight by taking shape around the books in the collection. At once surveys of subjects and essays in bibliography, they provide important context and some unexpected insights. Elisabetta Deriu, for example, points out that “the ideal horseman” in the Renaissance “was not merely a man capable of holding himself up in the saddle, he also had to master all the knowledge and techniques that would render him a complete horseman.” In other words, a mastery of horses demonstrated a mastery of knowledge — the latter being the real point.

The essays also point to some signal “rivalries.” The emergence of professional horsemen, masters of “hippiatrics,” in the 16th century, for example, quickly led to a bifurcation of horsemanship into the disciplines of farriery and veterinary medicine, producing two camps that any horse owner today will recognize. The entwined histories of equitation and martial arts, especially in the 18th century, produced even testier friction. The cavalry tactician Augustin Mottin, for example, dismissed Guérinière tout court — “someone who has spent his life in a riding school” can shed little light on “what needs to be done when charging at the enemy” — while an unnamed horseman, in turn, dismissed cavalry riding as “the equitation of swordsmen balancing on runaway horses.”

The catalogue forming the body of Great Books consists of “analytical” bibliography that is both descriptive and historical. Its entries are uniform in format (though not in length) — each entry provides a precise description of the book as object, including publication history and provenance, followed by commentary on the book in its historical context. Since Dejager’s collection contains multiple editions, printings, or copies of many books, the catalogue automatically tracks a book’s textual history (that is, the variations and evolution of its contents). And though the collection represents some authors with multiple works and others with single works, the catalogue provides brief biographical essays in all cases, situating works in authorial oeuvres and authors in broad conversations.

As one would assume, Dejager’s collection (and its catalogue) covers the seminal figures — Grisone, Fiachi, Blundeville, Markham, Cavendish, La Broue, Pluvinal, Guérinière, Stubbs, d’Aure, et al — as well as many less illustrious or even anonymous authors. It underscores the fact that these horsemen often were true polymaths — Blundeville, historian and mathematician, Markham, poet and playwright, and Cavendish, poet and playwright, diplomat and politician, and “one of the richest men in England.” It also reminds us that some pivotal masters — Pignatelli in the early 16th century, Caprilli in the early 20th — actually wrote little, but achieved stature through students who wrote a lot.

In addition to recording and teaching, Great Books entertains. It observes  “firsts” — Cesare Fiaschi, author of the first treatise on horseshoes, Marco de Pavari, first author to focus on bits, Herman Hugo, first author in the Thirty Years Wars to write about cavalry tactics “from the Catholic side.” It delights in odd books — Hans Kreutsberger’s catalogue of “bits and other horse furniture” (1562), which “may be considered the first illustrated trade catalogue from which customers could browse and order at their leisure.” And it revels in odd characters — Georg Rüxner, a Bavarian herald whose “Thurnierbuch,” or history of medieval tournaments (1530), listed 36 national tournaments in Germany from the year 939 to 1487, some 20 of them “invented” by Rüxner largely to boost sales to “families of noble descent who were only too proud to see their famous ancestors and hitherto unknown progenitors figuring in [his] book.”

Great Books is not without flaws. At roughly 13 x 9.5 x 3.75 inches in girth and 10 pounds in heft, it is a “door-stopper,” as Victorian reviewers might have said. Though not uncommon in major catalogues, its bulk detracts significantly from its ease of use. A two-volume format would have added cost, but also utility. In addition, the book’s pages have very meager inner margins, making an extremely small gutter. A reasonable trade-off in the bibliography, creating space for ample illustrations, the layout makes no sense in the introductory essays, where the same inner margins share space with extremely wide, empty outer margins. Reading the essays becomes unnecessarily difficult. Such flaws in bookmaking may seem picayune, but they matter in a lavish and painstaking book about books.

Those flaws, however, do not begin to rival the virtues of Great Books. Its introductory essays are engaging and instructive; its bibliographical entries are thorough and expert; its illustrations (especially those of title pages) are large enough for their text to be readable, thus conveying important information while pleasing the eye; and its multiple indices enable a reader to locate and cross-reference items by author, artist, printers and publishers, other names and places, previous owners, and catalogue numbers. The volume will reward researchers stalking specific facts or readers surveying early writing on horsemanship and, perforce, early horsemanship.

Great Books on Horsemanship joins a long and distinguished lineage of catalogues of major equestrian collections — Books on the Horse and Horsemanship, 1400-1941, The Paul Mellon Collection (1981), to name a notable recent example. Dejager’s collection has issued in a great book — an extraordinary resource well worth the investment in time and money. 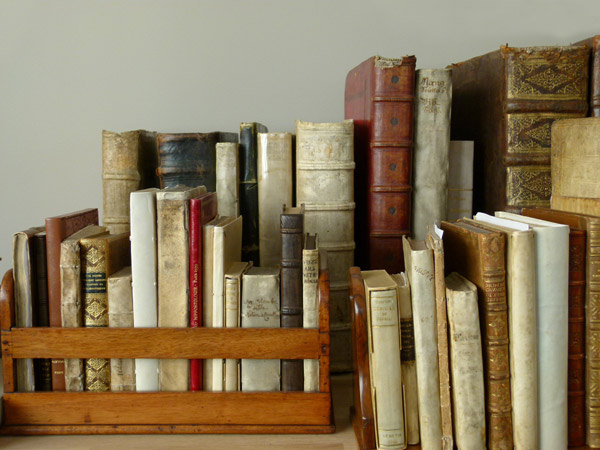