Two horses treated for bleeding, or exercise-induced pulmonary haemorrhage (EIPH), with electrolyte-based trans-dermal patches have come back to become record-breakers.

Signal-Health, the North American distributor of Equiwinner patches, says that its natural electrolyte-balancing system has enabled bleeders to perform at their best and beat track and arena records. 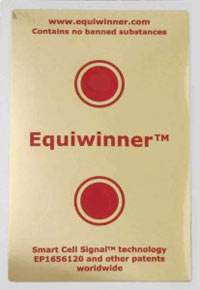 Thoroughbred trainer Anthony Farrior treated four-year-old colt Silver Antelope for bleeding last fall. After Equiwinner treatment he won his first race, then went on to break a 14-year-old track record at Mountaineer Racetrack in Chester, West Virginia on November 19. He sped five furlongs in 1:01.26, winning by four lengths and earning an 83 Beyer Speed Figure, a 23-point improvement over his previous start.

“He came back … and he won four out of the five Malibu rodeos I took him to. We won the barrels at the Malibu finals!” Phillips said.

The pair also won the 2014 Iron Cowgirl Challenge in Monongahela, Pennsylvania, and this summer they beat the barrels arena record at Malibu Ranch rodeos in Milford, PA, the first time on July 25 (14.923) and the second time at the Malibu Ranch Championship Rodeo on September 5 (14.732).

Signal-Health says the results are supported by recent research by Paul Morley on EIPH and its effect on racehorse performance. The study, conducted on 1000 thoroughbred racehorses in South Africa, found that although some horses that bleed continue to race effectively, an EIPH episode will stop horses achieving their absolute best.

Equiwinner, a non-invasive dermal patch, is a 10-day treatment for EIPH that resets electrolyte balance and starts to work almost immediately. Combined with only walking exercise for 15 days, Signal-Health says it restores all capillaries to prevent the extra high blood pressure that causes bleeding. The lung tissue has scars from previous bleeding, and these scars will normally rupture, causing more bleeding, but the Equiwinner procedure allows the scars to fully heal during the 15 days. Normal training can then be resumed.