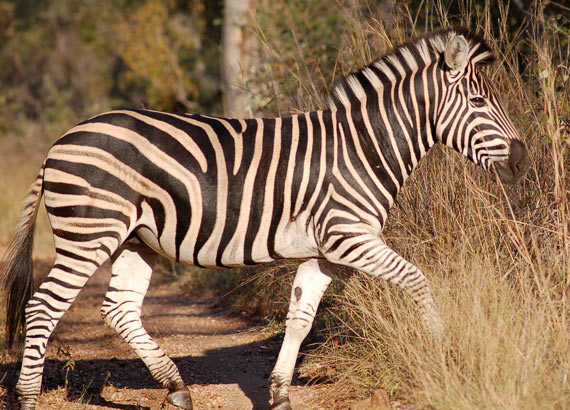 Scientists have pondered the evolutionary riddle posed by zebra stripes for well over a century.

Tim Caro and Theodore Stankowich, writing in the journal, Royal Society Open Science, acknowledged that the functional significance of the “extraordinary” stripes remained mysterious, but said it was now an active field of research.

The pair said four major hypotheses had been put forward in a bid to explain them:

The pair pointed to a recent study by Ren Larison and others which investigated the environmental factors that explain geographical variation in striping within the plains zebra. The researchers in that study matched variations in striping patterns at 16 sites across its geographical range to a suite of environmental variables as well as tsetse fly (glossinid) distribution and lion presence.

They found that greater intensities of striping within the species were associated with warmer temperatures and higher rainfall..

Caro and Stankowich said they published a similar study last year involving all seven species of equids – the three striped zebra species, the African wild ass which has leg stripes but no body stripes, the unstriped species of equids (E. hemionus, E. kiang, E. ferus przewalski), and 20 of their subspecies, and compared several aspects of the four hypotheses.

These were camouflage in woodlands, anti-predator defence against both lions and spotted hyaenas, social interactions, tsetse fly distribution, biting fly (tabanid) distribution using both temperature and humidity ranges as a proxy for abundance, and temperature data to assess the cooling hypothesis.

“Our study provided strong evidence that our proxy for tabanid fly parasitism was essentially perfectly correlated with the presence of stripes across species across almost every area of the body, and especially for leg stripes, the level at which biting flies prefer to land on hosts.”

They said there was experimental evidence that tabanid flies avoid landing on white, striped and spotted surfaces.

The pair said their study, together with the work by Larison’s team, have now tested several hypotheses for the function of striping in zebras.

“We want to stress that these two studies agree on a number of points that move detective work on the mystery of zebra stripes forward considerably,” they said.

“Both studies found no convincing evidence for the geographical distribution of stripes on any part of the body being associated with lion distribution across the African continent.

“Both studies remark that this is unsurprising because a considerable body of literature finds that zebras are a preferred prey of lions in most ecosystems.

They continued: “Our studies found no evidence for striping being associated with woodland or tree cover, refuting the idea that stripes are a form of crypsis [camouflage] against predators.

The two studies concurred in finding that aspects of striping being related to temperature and moisture.

“We found many aspects of striping – number of face stripes, neck stripes, flank striping, rump striping, shadow stripe severity and leg stripe intensity – are associated with temperatures lying between 15°C and 30°C and humidity between 30 and 85%.”

They described such conditions as being a proxy for tabanid abundance when these conditions persisted for at least six to seven months.

In short, the studies found that striping was associated with warm humid conditions both within equid species and across different species.

“While it is often expedient to call attention to differences in findings between studies, in the interests of publication and publicity, it is often more constructive in the long run to focus on similarities.

“We suggest that the only two multifactorial studies of this problem, conducted independently, have remarkable concordance in dismissing lion predation as driving striping in equids, rejecting stripes having a cryptic function in wooded habitats, casting aspersions on tsetse fly distributions being of major importance for striping, and either questioning or dismissing the idea that stripes can generate cooling eddies, respectively, on the legs or anywhere on the body.”

The evidence in the two studies, they said, pointed indirectly to annoyance by tabanid or other biting fly (eg, muscid, simuliid or mosquito) being the evolutionary driver of striping in Equidae, most probably because of the diseases that they carry and for which they are renowned.

However, both sets of authors acknowledged a “joint handicap”. Both were hampered by a lack of understanding of the extent to which temperature and humidity predicted fly annoyance, the specific problems posed by biting flies, the extent to which biting fly distributions and the diseases that they can carry merge, and the mechanism by which stripes prevent flies from landing on the zebra’s coat. Is it, for example, disrupting their outline or confusing the motion detection systems of insects that control their approach and landing?

They suggested that future research targeting such issues would improve understanding of why zebras have stripes.

The original report was published as an open access article.