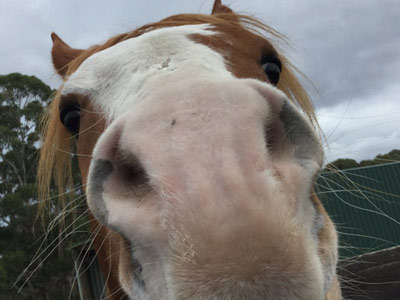 The widespread occurrence of gastric ulcers in horses and risk factors behind their cause have been outlined in a consensus statement from the European College of Equine Internal Medicine.

The six-member committee which wrote the consensus paper, published in the Journal of Veterinary Internal Medicine, also outlined strategies to reduce the risk or impact of gastric ulcers, based on available evidence.

The paper traverses a range of factors involving gastric ulceration, saying that terminology was often misused. It proposed that the term Equine Gastric Ulcer Syndrome (EGUS) be used as a general all-encompassing term to describe erosive and ulcerative diseases of the stomach consistent with the use of the term peptic ulcer disease in humans.

It also recommended expansion of the existing terminology to specifically identify Equine Squamous Gastric Disease (ESGD) and Equine Glandular Gastric Disease (EGGD) as terms that more specifically describe the affected region anatomically. The upper portion of the equine stomach is lined by squamous mucosa similar to that of the esophagus. The lower portion is lined with glandular mucosa.

The committee found that the prevalence of gastric ulceration varied with breed, the use of the animals and the level of training.

The highest prevalence of ESGD occurred in Thoroughbred racehorses with 37% of untrained horses affected, increasing to 80–100% within 2–3 months of race training.

Standardbred racehorses have a similar overall ESGD prevalence of 44% that rises to 87% in training, while 17–58% of show/sport horses and 37–59% of pleasure horses were affected.

Endurance horses have an ESGD prevalence of 48% during the out-of-competition period that rises to 66–93% during the competitive season, with lesions most prevalent in elite horses.

Horses that are rarely competed and predominantly used in their home environment have the lowest ESGD prevalence of 11%.

The prevalence of EGGD, affecting the lower part of the stomach, is less well understood. Australian Thoroughbred racehorses have reported prevalences of between 47% and 65%. In endurance horses, the prevalence is 16% outside of the competition period and 27–33% while competing. A retrospective study in Britain found the disease in 54% of 191 leisure horses and in 64% of 493 sport horses.

Comparably, 57% of horses used for a variety of purposes were reported to have EGGD in two separate studies.

A postmortem study of 3715 horses over 72 years found significant associations between the presence of stomach ulceration and breed (Thoroughbred and Standardbred breeds were more likely to have ulcers than cold-blooded horses) and sex (a higher prevalence was reported in stallions than mares and geldings).

In contrast, two large cross-sectional studies of Thoroughbred racehorses documented no significant effect of age or sex on the likelihood of having ESGD.

In a retrospective study of 684 sport and leisure horses in Britain, no effect of age, sex or month of presentation was found on prevalence of either form of gastric ulcers. However, a significant association was found between the Thoroughbred breed and the presence of ESGD in horses of any age. 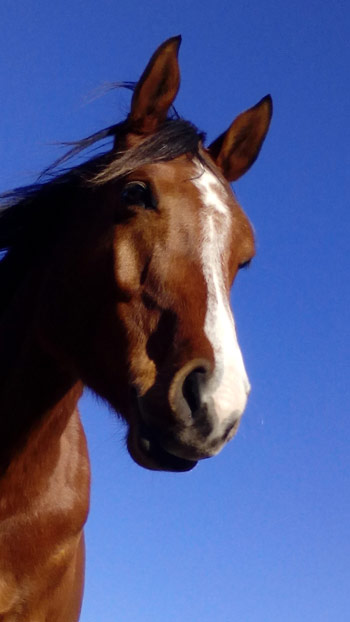 “Together, these findings suggest that other factors such as intensity or duration of exercise outweigh any potential age or sex effect, but that a breed effect might be present with Thoroughbreds predisposed to ESGD,” the authors noted.

They said there were few large-scale studies that investigated other risk factors for EGUS.

Of those available, significant associations have been shown between ESGD and individual trainers, yard location (horses trained in urban areas were 3.9 times more likely to have gastric ulcers), a lack of direct contact with other horses, solid barriers instead of rails, and talk rather than music radio in the barn.

Straw feeding and a lack of access to water while at pasture have been associated with an increased risk of EGUS in general.

Further large-scale work was required to better understand the factors which influence disease development, they said, particularly in the case of ulcers in the lower part of the stomach, in the glandular mucosa.

Exploring nutritional risk factors, the authors said pasture turnout was considered to reduce the risk of ulcers, although evidence supporting this belief was conflicting.

“Horses with access to some turnout were less likely to have ESGD, and this risk was even lower if they were turned out with other horses in one study of Thoroughbred racehorses in training.

“Conversely no effect of quality of pasture, or time at pasture (stabled, stable and pasture, pastured) was shown on ESGD prevalence in another study of Thoroughbred racehorses.”

They continued: “Free access to fibrous feed or frequent forage feeding is widely considered to reduce the risk of gastric ulceration although strong evidence supporting this belief is also lacking.

“Together, these findings suggest that that the impact of forage feeding in the absence of other risk-factor reduction might not be as great as previously believed.”

They said a more consistent effect was observed with increased starch/grain intake. “This [has] been associated with an increased risk of ESGD in animals working at various levels of intensity in a number of studies.

“There is a marked increase in ulceration when non-exercising animals are stabled and fed grain at 1% of bodyweight, one hour before hay is fed.”

Similarly, exceeding 2 grams per kilogram of bodyweight of starch intake per day was associated with about a two-fold increase in the likelihood of more serious ESGD.

“ESGD developed in all horses within 14 days of their removal from pasture, stabling (fed 6 kg concentrate feed/day) and entering a simulated training regimen.”

The committee noted that gastric ulcers have been loosely associated with a range of clinical signs in adult horses, despite a lack of strong evidence to support them. 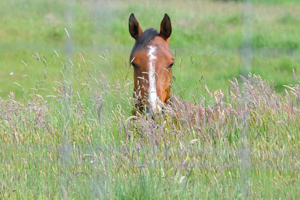 The committee said there was some evidence to suggest that gastric ulcers were associated with an increased incidence of colic and, in particular, recurrent abdominal discomfort following a meal.

Gastric ulcers were reported in 83% of horses with recurrent colic in one study, of which 28% had colic attributable to gastric ulceration

It was, the authors noted, a common perception that horses showing stereotypic or altered behavior were more likely to have ulcers. Reported changes include nervousness, aggression, and self mutilation.

The committee concluded that a wide range of clinical signs might be present in individual cases of stomach ulcers, with varying degrees of reduced appetite and poor body condition the most prevalent at a population level.

Although inconsistent, effects on behavior (including stereotypical behaviors) were not uncommon.

Likewise, it was recognized that stomach ulcers might result in poor performance. “However, given the numerous factors that potentially contribute to poor performance, other causes need to be considered.”

The committee found that although a wide variety of clinical signs might be present in individual cases of gastric ulcers, they were nonspecific and poorly associated with the presence of the condition.

The committee said it did not support the practice of diagnosing gastric ulcers based on “characteristic” clinical signs, instead recommending a gastroscopy. It was, the authors said, the only reliable method for definitively identifying gastric ulceration in living horses.

There were, they added, no reliable blood or biomechanical markers available to aid in diagnosis.

The committee found that a variety of management factors contributed to the development of ulcers in the upper part of the stomach. All shared the common trait that they increased the exposure of the squamous mucosa to acid.

In contrast, the physiological processes behind ulceration in the lower part of the stomach, in the glandular mucosa, were poorly understood.

The committee took the view that appropriate acid suppressor treatment was indicated in the management of gastric ulcers, with omeprazole being the best-studied drug in horses for this purpose.

Omeprazole remained the drug of choice for treatment of gastric ulcers, it found.

To date, specific guidelines for the prevention of EGGD have not been developed although the effectiveness of omeprazole as a preventative measure was unclear, with 23% of horses experiencing worsening of their EGGD in a series of recent studies, despite omeprazole treatment.

“Considering this, the following recommendations are based on the committee’s interpretation of the available literature and their collective opinion as to what represents the current best practice.

“To date, little evidence exists for the role of diet in EGGD and as such the following recommendations are based primarily on risk factors identified for ESGD.”

It said continuous access to good quality grass pasture was considered ideal, although the committee acknowledged that the evidence supporting such a recommendation was conflicting.

“Free choice, or at least frequent feedings (4–6 meals a day), of hay might be a suitable replacement.”

Horses fed hay should receive a minimum of 1.5 kg of dry matter per 100kg of bodyweight per day, the committee said.

Overweight horses and ponies at risk of ulcers should receive a minimum amount of high quality forage (1.5 kg of dry matter per 100kg of bodyweight per day), but it should be mature and have low energy content.

“If low energy forage is not available then a mixture of high quality forage and straw divided into a minimum of four feedings might be a suitable alternative.

“Straw should not be the only forage provided but can be safely included in the ration at less than 0.25kg of drug matter per 100kg of bodyweight.

“Horses should be fed grain and concentrates as sparingly as possible,” the committee said.

“Feeding of sweet feed should be avoided as a large quantity of volatile fatty acids could be produced if greater than 1 to 2kg of sweet feed is fed per meal.

Concentrate meals should not be fed less than 6 hours apart.

Vegetable oils such as corn oil might help reduce the risk of EGGD, the committee said.

Water should be provided continuously. An increased risk of ulceration in the upper portion of the stomach has been shown with electrolyte pastes or hypertonic solutions given by mouth, but not when electrolytes were mixed in feed or given in lower doses in water.

“As such the committee considers the use of electrolytes with feed to be safe.”