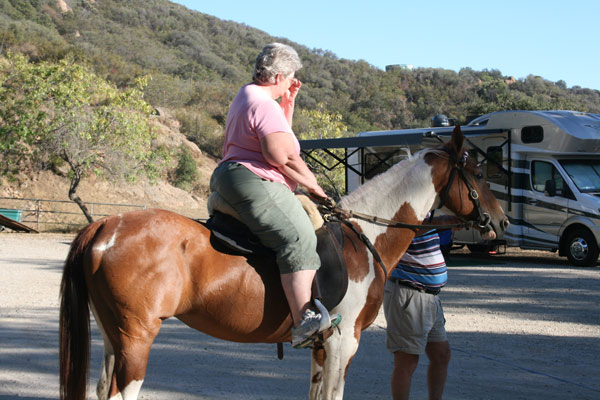 Maybe, maybe not. A “scientific study” has concluded that a horse cannot comfortably carry more than 10 percent of its own weight. I have been looking for the punch line ever since: obviously, this is a joke! This would mean 80 percent of the people riding horses today are too fat!

According to The US Cavalry Manual of Horse Management (1941) a horse should not carry more than 20 percent of its own weight. This edict was routinely exceeded, soldier and equipment regularly weighing 250lb.

Researchers at Duchy College, in Cornwall, England, studied horse impact from 50 riders executing 45-minute workouts and they too came up with the 20 percent recommendation. This was ascertained by monitoring the release of creatine kinase, an enzyme present in the muscle and released into the blood to restore muscle damage. This enzyme is triggered when an increasing heart rate releases plasma lactate to levels the horse’s body cannot metabolize.

Of course, the scientists noted that the impact on the horses varied greatly. Those with wider loins and thicker cannon bones recovered more quickly. Experienced riders know the fit of the saddle is vital.

For most of the 5000 years men have been riding horses they have used them to go places to kill each other. Pleasure riding, as we know it today, is barely 100 years old!

Attila stole this idea from the Sarmatian women warriors (400 BC) who built a wooden “casing” on a horse so they would not be ejected when they ran a lance through an enemy ground soldier. They invented mounted lance warfare, these women who were feared above all other warriors. They cut off their right breast so they could more easily pull a bow. The Greeks founded the Amazon legend on the Sarmatians, with whom they became acquainted as traders.

Next, Attila stole a stirrup the Chinese used as a mounting aid during the same period. Amazingly it took 800 years for somebody (Attila) to think of putting a second stirrup on the other side!

The Romans soon visited Attila’s discovery but were quick to establish weight limits.  “Cloak bags” were not to weigh more than 35lb, saddles not more than 56lb.  Add this to 200lb of an average armed warrior and the Roman warhorse carried 300lb, well over 30 percent of horse weight. Still, they conquered the world.

Over the next thousand years weight increased even more. Knights of old were actually lowered on their horses with pulleys, after two men fitted the saddle.

Advance to the South African War (1899-1902) the average weight of an Allied soldier with equipment was around 320lbs. For the British Desert Mounted Corps in Palestine and Syria (1917-18) the typical weight carried was 290lb, “all day and every day,”  according to saddle historian Major G. Tylden.

Hitler had the most mechanized army the world had ever seen, yet he had three million horses under his command. They carried 250lb to protect his Tiger Tanks.

For the war in Afghanistan, I saddled 130 horses for the US Special Ops, also designing scabbards for their M4s. Those horses packed 250lb.

Today, for the first time in the long man/horse partnership we are not eating them or causing them to die in battle. We are actually enjoying them and, I like to believe, they are enjoying us.

Ironically, all this feel-good stuff has happened when humans have grown substantially. In the last 50 years, we have outgrown airplane seats, cars, furniture and houses. When I started putting Americans in Australian stock saddles in 1979 the average seat size (Australian) was 16”. Today it is 17” and rising.

But the horse has not changed. Clearly, humans and horse are on a weight-impact collision course. 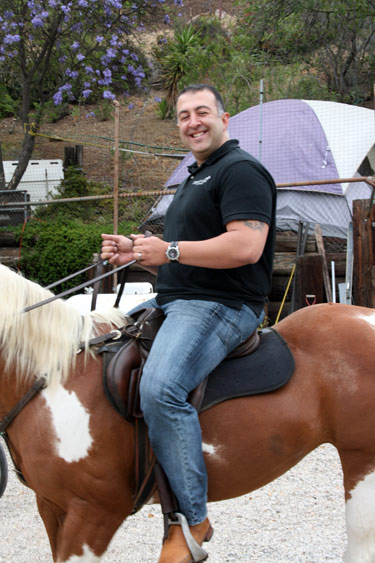 The good news is people are asking themselves: Am I too fat to ride?

I consider reality rather than scientists, who can crunch numbers and come up with any result they want to push an agenda. I suspect much of the weigh-impact-on-horse dialogue is advanced by people who do not want us to do anything with animals other than look at them. It is easy to imagine that in 200 years humans riding animals will be illegal. And we won’t be looking at them in zoos either. Zoos will be banned. We will view them “virtually.”

Another likely agenda is the persuasive prejudice modern cultures have toward fat people. They are discriminated against in jobs, social situations and almost any human interaction. Except in China, where fat people are admired!

Meanwhile, horse lovers are taking note. Bayard Fox, the owner of Equitours, sends people to dozens of countries to ride horses – but he has a weight limit of 200lb. Still, he does not chisel that in stone, explaining: “In actuality, we have felt that some riders weighing 210 pounds were easier for horses to carry than others weighing only 175 pounds.”

Bottom line: riders who move with a horse are “lighter” than people of the same weight who “ride like a sack of potatoes”.

There is a popular misconception that big people should ride big horses. The reality is that smaller horses can carry a higher proportion of their own weight than bigger horses. In the trench warfare of World War 1, Connemara ponies carried half their body weight all day long. Mules and donkeys do the same today.

Endurance rider Ed Anderson rode his 14.3hh 900-lb Arabian gelding Primo 2000 miles from Mexico to Canada carrying up to 275lb  — around 36 per cent of the horse’s body weight. “I went solo and unsupported,” he says. “Primo had no problems.”

But as Dr Gary Carlson DMV cautions: “Every extra pound a horse has to carry from point A to point B requires that much more energy.”

Colin Dangaard is the founder and President of the Australian Stock Saddle Company, launched with his wife Linda Fox in 1979. They were the first to bring the Australian stock saddle to the USA.