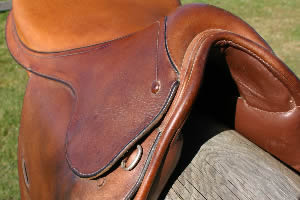 Thicker pads appear to reduce the pressure on the horse’s back under the saddle, according to researchers.

A study team investigated the effect of saddle pads of different thicknesses on the likely pressure exerted on the horse’s back. They did so by measuring the depth of indentations on a specially designed measuring pad.

Dr Hayley Randle reported on the findings in a poster presentation during the recent International Society for Equitation Science conference in Vancouver, Canada.

Randle noted that although saddle pads were often added to improve saddle fit, in addition to protecting the saddle from dirt from the horse, there was little research into their impact on the pressure exerted on the horse’s back.

Some owners reportedly use a combination of up to four saddle pads in preference to having saddles refitted, she said.

For the study, eight horses – three mares and five geldings – were randomly selected from a group of horses and were ridden by riders all deemed experienced by a qualified instructor.

Horses were tested under four conditions: with no pad, a 4-millimetre thick Shires brand cotton saddle pad, a 6mm thick cotton PolyPad and a Mattes cotton and sheepskin pad, which is 8mm thick.

Likely saddle pressure was assessed using a Port Lewis Impression Pad which was placed on each horse’s back beneath the saddle pad and the saddle.

Following each ridden exercise the impression pad was removed, placed on a flat surface and the depths of indentations at six specific locations – front, middle and back on the left and right sides – were measured immediately using a depth gauge.

Saddle-pad thickness affected the indentation depth recorded on the impression and therefore the likely pressure on the horse’s back, Randle reported.

There were significantly shallower indentations with a sheepskin pad than with the 6mm PolyPad, the 4mm Shires pad,  and without a pad, she said.

“Significantly greater indentations were evident on the left side than on the right side.”

With all pads, there were shallower indentations in the middle section of the impression pad than at the front or the back.

The use of saddle pads of different thicknesses influenced the likely pressure on the horse’s back, Randle and her colleagues concluded in the research.

Randle was joined in the study by Jessica Giblett and Alison Abbey, both of whom are also from Duchy College.

One thought on “Saddle pads: Is thicker necessarily better?”