The traditional tipple of Scotland will feature at the Longines FEI European Eventing Championship, with the Kilchoman Distillery coming on board as a sponsor for the event at Blair Castle later this year.

Kilchoman is one of the smallest single malt whisky distilleries in Scotland, and one of only a handful which still practise traditional floor malting. 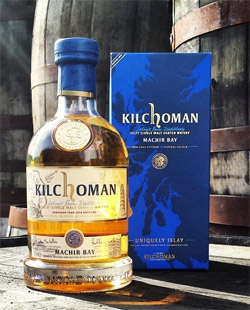 Based on Islay, known as ‘The Queen of the Hebrides’, the distillery was founded in 2005 and grows its own barley on the farm, making it the only distillery to complete all parts of the whisky making process on site.

The Championship take place at Blair Castle from  September 10 to 13. For each day of the event, there will be a ‘Kilchoman Moment of the Day’ awarded; the winner will be presented with a bottle of their iconic 100% Islay whisky in the main arena. The prize will be awarded for anything from an exceptional moment on the field of play, through to an outstanding contribution by a spectator at the event.

“We are delighted to be a sponsor at the Longines FEI European Eventing Championship,” said Anthony Wills, founder and Managing Director of the Kilchoman Distillery. “We are proud of our Scottish roots and we look forward to being part one of the most anticipated events of the year.”

Alec Lochore, Blair 2015 Event Director said: “We are pleased to have a family-owned Scottish distillery that encompasses the spirit of Scotland sponsoring at Blair 2015. I think it’s a brilliant gesture for the distillery to award a prize everyday to the winner of the ‘Kilchoman Moment of the Day’.”

The European Eventing Championship forms part of UK Sport’s major events programme, which is investing about £40 million of National Lottery funding to bring up to 100 world-class events to Great Britain to help build a strong legacy from London 2012 and the Glasgow 2014 Commonwealth Games. The Championship is also supported by EventScotland, which has a longstanding relationship with the team at Blair Castle.