Pony Power has reared its head in the literary world, with an equine anti-hero and a young warrior princess taking their place in battle. 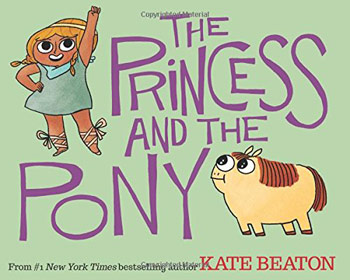 The newly-released picture book, The Princess and the Pony, written and illustrated by Canadian artist Kate Beaton, tells the story of Princess Pinecone, the smallest warrior in a kingdom of warriors. She longs for a horse for her birthday. Not just any horse; a giant stallion fit for a warrior princess.

But the equine who arrives is not exactly the horse of the princess’s dreams. She’s rather cute, but dreadfully flatulent, much to Princess Pincecone’s horror.

But sometimes small ponies can be full of big surprises.

In a review, Publisher’s Weekly described the book as “smart, brisk story that tosses aside conventional ideas of what princesses (and ponies) are ‘supposed’ to be.”

Beaton, an artist from Nova Scotia, first made her name in webcomics, but has since branched out into comic books, magazines, illustration, and most recently, creating picture books for children.

The Princess and the Pony is her first picture book, though a similar small, round pony has been seen by Beaton’s fans for several years.

The Princess and the Pony retails for about $US12 on Amazon. Its official launch is on Saturday at Little Island Comics in Toronto.