Maiden mares in their teens need careful management in order to achieve a successful pregnancy. Jonathan F. Pycock looks at common issues affecting older mares who are being bred for the first time.

Despite never being bred before, many older maiden mares are susceptible to post-breeding endometritis. It is particularly important to recognize and manage appropriately these mares.

Many times, mares that have had a showjumping or dressage career may not be presented to be bred until they are in their teens, and these older maiden mares can be very difficult to get in foal. Many of these mares have some common characteristics that resemble a syndrome.Endometrial biopsy samples reveal glandular degenerative changes and stromal fibrosis (endometrosis) as an inevitable consequence of aging, despite the fact they have not been bred.

Another common characteristic of these mares is uterine fluid. An older maiden mare often has an abnormally tight cervix that fails to relax properly during estrus; as a result, fluid is unable to drain, and it accumulates in the uterine lumen.

In many cases, this fluid is negative for bacterial growth and presence of neutrophils (PMNs). After the mare is bred, the fluid accumulation will be aggravated because of poor lymphatic drainage and impaired myometrial contraction compounded by the tight cervix. The amount of intrauterine fluid will vary in individual mares, and it ranges from a few milliliters to more than a liter in extreme cases.

These mares must be considered highly susceptible and managed accordingly.

Diagnosis of the Fluid-Producing Mare

Diagnosis can be difficult, because there may only be subtle changes in the uterine environment that are not readily detected by current diagnostic procedures.

Many mares show no signs of inflammation before breeding but will fail to resolve the inevitable endometritis that follows mating. Response to bacterial challenge has been used in a research setting.

Demonstration of clearance failure using scintigraphic and other methods based on charcoal clearance has been used to make an accurate diagnosis of a mare that has a clearance problem, but they are difficult to apply in practice.

History of repeat breeding and/or fluid accumulation at the time of breeding is perhaps the most useful indicator of a susceptible mare in practice.

Ultrasound detection of uterine luminal fluid has proved useful in identifying mares with a clearance problem. The presence of free intraluminal fluid before breeding strongly suggests susceptibility to persistent endometritis.Generally, if there is >1cm of fluid during estrus, some attempt should be made to remove it before breeding using oxytocin.

If the volume is >2 cm, the fluid may need to be drained and investigated for the presence of inflammatory cells and bacteria. The mare may then need to have a large-volume uterine lavage before breeding. Significant intrauterine fluid present in the early post-breeding period (4-8h after breeding) may also be an indication of poor uterine clearance.

If intrauterine fluid is visible using ultrasonography >18h after breeding, the mare should be diagnosed with defective uterine clearance.

Intrauterine fluid during diestrus is indicative of inflammation and associated with subfertility because of early embryonic death and a shortened luteal phase.

The aim of the treatment should be to assist the uterus in physically clearing the normal inflammatory by-products of the response to breeding. 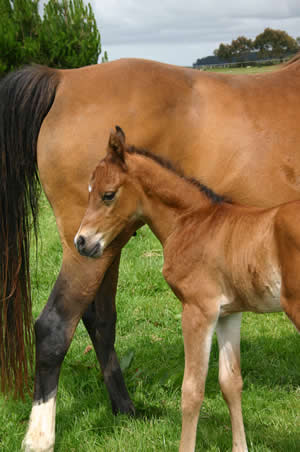 Both coitus and artificial insemination can be a source of uterine inflammation. It is well known that spermatozoa are responsible for initiating a marked inflammatory response that leads to a persistent endometritis in susceptible mares.

Therefore, susceptible mares should only be bred one time, regardless of whether natural mating or artificial insemination is used.

Within 4 h of mating, the spermatozoa necessary for fertilization are present within the oviduct.

The embryo does not descend into the uterus for ~5.5 days; therefore, mares may be treated safely from 4 h post-mating until 2 days post-ovulation, providing that isotonic solutions are used.

Progesterone concentrations rise rapidly after ovulation, and it is preferable to avoid treatment involving uterine interference after 2 days post-ovulation.

The successful management of older mares should logically require some form of post-mating therapy such as uterine lavage, IV oxytocin, or intrauterine antibiotic infusion. These therapies may be used alone or in combination. For the susceptible mare, treatment should be implemented in the post-breeding period rather than after ovulation.

In the period between breeding and ovulation, the susceptible mare frequently accumulates a large volume of fluid, and bacteria are in a logarithmic phase of growth. Therefore, expedient treatment of these mares is critical to fertility.

Oxytocin is the ideal method of treatment; it is a non-invasive technique and frequently provides early and complete elimination of any intrauterine fluid. The beneficial effect of oxytocin is widely accepted.

Oxytocin stimulates uterine contractions in the cyclical, pregnant, and post-partum mare. This therapy was first suggested to promote uterine drainage in mares with defective uterine clearance by Allen.

Oxytocin is now widely accepted as an effective therapy in aiding mechanical clearance mechanisms and improving fertility. In a recent study in reproductively normal mares, Paccamonti et al. reported that the half-life of oxytocin was 6.8 min. Mares were given oxytocin (10 or 25 IU, IV) on the day of or 2 days after ovulation. Neither dose of oxytocin nor day of treatment affected the half-life of the exogenous oxytocin.

There is no advantage in using .25 IU, and it may even be that the same effect can be obtained by use of 10 IU if treatment is during the preovulatory period. Larger doses of oxytocin (25 IU) have been associated with a decreased pregnancy rate; however, this dose is frequently used in clinical practice, and no other studies have reported this finding. The dose of oxytocin used by the author in mares ~500 kg is 20 IU given either IV or IM. Smaller mares are given 15 IU of oxytocin.

Recently, a long-acting analogue of oxytocin, carbetocin, has become available in the United Kingdom and may have an indication where a more prolonged uterine contraction is desired. Preliminary work in the author’s practice has shown it to be safe and effective at inducing uterine clearance.

Two IM injections of 0.14 mg carbetocin are given 12 h and 24 h post-breeding in mares with marked uterine edema or free fluid before breeding or in mares with uterine fluid >2 cm deep 12 h postbreeding.

Uterine lavage is a useful tool to aid in the mechanical evacuation of the uterine contents. The technique involves infusing ~1 l of previously warmed (~42ºC) sterile physiological (buffered) saline or lactated Ringer’s solution into the uterus using a catheter that has been retained within the cervix through a cuff. The fluid is then siphoned out of the uterus by gravity flow. This process is repeated two to four times or until the effluent is clear.

The optimum time for uterine lavage therapy in highly susceptible mares was found to be between 4 and 6 h in a study by Knutti et al.

Twice as many mares with the early lavage were pregnant compared with the group of mares not lavaged until 18-20 h after insemination.

The results of this study correlate with the findings of Brinsko et al. that a uterine lavage performed 4 h after insemination does not adversely affect conception rate.

In our practice, known susceptible mares are routinely lavaged the day after breeding. Working on the principle that the longer a foreign particle stays in the uterine lumen, the more PMNs accumulate, earlier treatment should reduce the inflammatory reaction and improve the chances for these susceptible mares to get pregnant. Mares believed to be highly susceptible to endometritis based on history or fluid accumulation should have the lavage performed within 4-6 h.

Prostaglandins are known to be released from the endometrium very early in mares with endometritis.

The useful role of prostaglandin in increasing myometrial activity and assisting uterine clearance has been shown. On one hand, Cadario et al. and Combs et al. showed that the prostaglandin analogue cloprostenol caused increased clearance of radiocolloid in susceptible mares but at a significantly slower rate than that caused by oxytocin.

On the other hand, cloprostenal caused the uterus to contract for a longer time (5 h) than oxytocin (45 min). Of the prostaglandins administered (PGF2-alpha, cloprostenol, and fenprostalene), cloprostenol produced the most consistent response. Cloprostenol is indicated in mares that have lymphatic stasis as shown by excessive edema within the endometrium or large lymphatic cysts. The suggested dose is 250µg cloprostenol given at 12 h and 24 h after breeding.

Cloprostenol should not be given after ovulation to avoid inducing premature luteal regression.

The infusion of broad-spectrum antibiotics after breeding is controversial. In scientific experiments using an endometritis model, it has been shown that saline lavage and uterotonic drugs such as prostaglandin F2-alpha are as effective as antibiotics in eliminating bacteria from the uterus.

However, this was a controlled experimental-type situation in which a single bacterial species (usually streptococci) was infused into the uterus, and lavage treatment was performed at a fixed time (within 12 h of mating).

Under live mating conditions, there is a mixed bacterial contamination, and lavage cannot always be performed within 12 h. For these reasons, the author prefers to use intra-uterine antibiotics as part of the therapeutic protocol. The treatments have different effects on the uterus: the uterine lavage provides mechanical evacuation of intraluminal fluid and inflammatory products, whereas the single infusion of broad-spectrum antibiotics should prevent any growth of bacteria introduced during insemination or uterine lavage.

Furthermore, mares susceptible to post-breeding endometritis have, according to their history, a reduced capacity of uterine clearance and defense mechanisms.

Therefore, they cannot be compared with healthy mares used in experiments. Routine administration of intrauterine antibiotics has no negative effect on the pregnancy rate of treated mares.

How to breed the mare who accumulates fluid

Overall management of such mares must be excellent before breeding.

Article © Jonathan F. Pycock, 2007. This article, first published on Horsetalk.co.nz in April 2007, may not be reproduced in any form without prior permission.