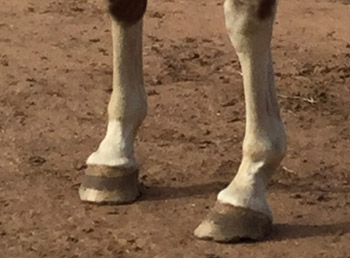 The researchers from the veterinary department at Ghent University used a pressure plate to gather information for the study.

Toed-in hoof conformation has been associated with an increased risk of lameness and shorter careers in equine athletes, presumably linked with changes in hoof balance, Maarten Oosterlinck and his colleagues reported in their study, published in the Journal of Equine Veterinary Science.

Five measurements of each forelimb were recorded at walk, and toe-heel and medio-lateral hoof balance of the vertical ground reaction force were calculated throughout the animals’ stance.

All horses presented higher loading of the lateral (side) zone at impact, while loading of the medial and lateral zones at mid-stance was more akin to that found in horses with normal conformation. Increased lateral loading was recorded at the end of the stance phase in both forelimbs in the toed-in horses.

Unlike in normal horses, higher toe-loading at impact was seen in four of the five horses, while one horse presented higher loading of the heel zone at impact in both forelimbs.

Limb loading symmetry was lower than that expected in sound horses.

The researchers said it was unclear if the toe-heel balance issue identified in toed-in horses predisposed them to lameness, or was a consequence of it.

“But it may be associated with distal limb lameness, as increased loading of the toe early in the stance phase has been associated with navicular disease,” they reported.

One thought on “Heel-toe imbalance identified in toed-in horses”