Fundamental changes are needed in the way that key parasites are managed in horses, according to an expert, who cites the indiscriminate use of worming medications for more than four decades.

Professor Jacqueline Matthews, writing in the International Journal for Parasitology: Drugs and Drug Resistance, said overuse of worming medications, or anthelmintics, in horses had reduced disease, but led to widespread resistance.

Matthews, who is with the Moredun Research Institute in Scotland, said good grazing management must be integrated with targeted anthelmintic treatments.

She said the effectiveness of current drugs might be prolonged until new chemotherapeutics were found by moving to evidence-based parasite management built on best practice. This would involve limiting the use of worming medications and ensuring correct dose rates, combined with targeted grazing management and exploiting available diagnostic tools.

“This is paramount because reversion to anthelmintic susceptibility, in all probability, will not occur in nematode populations once they have become resistant,” she said in her review.

“Anthelmintics have been applied indiscriminately to control horse nematodes for over 40 years,” Matthews wrote.

“The widespread use of such programmes has substantially reduced clinical disease, especially that associated with large strongyle species,” she said. “However, high treatment frequency has led to considerable selection pressure for anthelmintic resistance, particularly in cyathostomin species.

“Field studies published over the last decade indicate that benzimidazole resistance is widespread globally in cyathostomins and there are also many reports of resistance to pyrantel in these worms.

“Cyathostomin resistance to the macrocyclic lactone compounds is emerging, principally measured as a reduction in strongyle egg reappearance time observed after treatment.

“Ivermectin resistance is a further concern in the small intestinal nematode, Parascaris equorum, an important pathogen of foals.

“These issues indicate that horse nematodes must now be controlled using methods less dependent on anthelmintic use and more reliant on management practices designed to reduce the force of infection in the environment.”

Diagnostic tests to obtain egg counts needed to be robust and practically applicable, she said. 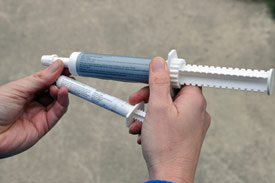 Matthews concluded: “The lack of benzimidazole and tetrahydropyrimidine efficacy measured in equine nematode populations across the world, along with clear indications of emerging resistance against ivermectin and moxidectin, emphasises the need for fundamental changes in the way that nematodes are managed in horses.

“The macrocyclic lactone anthelmintics have the major market share globally and until recently, serious consideration had not been given to protecting efficacy of these compounds by implementing control programmes that use these medicines in a more targeted manner.

“Although targeted programmes are being used in some regions, the advantages of these programmes need further dissemination to ensure further uptake.”

She said many horses were still subjected to regular blanket anthelmintic treatments with no attention paid to effectiveness.

“A lack of uptake of evidence-based strategies may be due to the perceived complexity involved in integrating these methods in practice,” she said.

“It is essential that barriers be broken down so that those involved in prescribing and administering anthelmintics have confidence in delivering evidence-based protocols.

“This requires that stakeholders have easy access to up-to-date knowledge, as well as to robust diagnostic tests required to support decision-making.

“The gap between research findings and implementation at farm level is a continuing challenge for scientists working in equine parasitology,” she said.

“One piece of evidence to start reducing this gap is that initial feedback from horse owners indicates that by using targeted treatment strategies, considerably fewer anthelmintic treatments are applied … this can lead to substantial financial savings.”

Matthews said there was still a requirement for better tools to help with evidence-based parasite control, but new tests were on the horizon.

“These will need to be priced and marketed properly to ensure that they are used across the equine industry.”

Anthelmintic resistance in equine nematodes
Jacqueline B. Matthews
doi:10.1016/j.ijpddr.2014.10.003
The full report can be read here.