A field of eight pint-sized racers blazed their way to the winning post at Bath on Britain’s Bank Holiday Monday races yesterday, in the meeting’s annual shetland race. 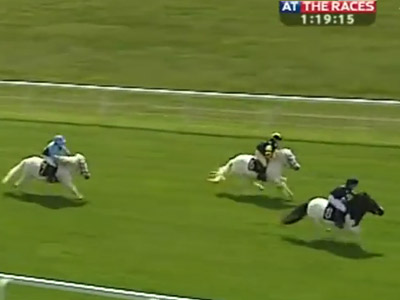 Black and white shetland Scotts Craig Lindsay, ridden by Poppy Clarke, took the honours after a frantic race in which the eight shetlands galloped their hearts out. They were challenged by Portly Sophia and Annabelle Candy, but Scotts Craig Lindsay pulled away to win by about three lengths – shetland lengths, that is. Scotts Craig Robbie was third for Natasha Candy.

The ponies ran over about 600 metres.