Jenny the donkey has been harboring a secret for the better part of a year. She has performed her role as a guard donkey admirably since arriving last May at the University of Rhode Island’s Peckham Farm, where she protects sheep and goats from attacks by coyotes or feral dogs.

But last Sunday all was revealed. She delivered a totally unexpected foal.

When senior student Kathryn Voelkner arrived at the farm to give the animals their morning feed, she noticed that Jenny – one of the farm’s two donkeys – was lying on the ground and breathing heavily. Then she noticed why.

Jenny, 3, had just given birth to her first foal. 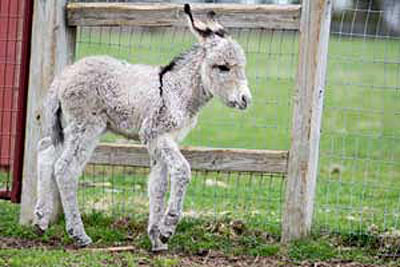 “When I walked over to Jenny, I noticed that her attention was focused on something behind me,” said Voelkner, an animal science major from Clarks Summit, Pennsylvania.

“I turned and saw the baby trying to take her first few steps. She was still wet from the birthing process, so she must have been born just minutes before I arrived.”

The farm’s manager, Nick Miniter, said no-one knew that Jenny was even pregnant, since the university’s only other donkey, Rosie, is also female.

Jenny must have been pregnant when the university acquired her. Donkey gestation lasts about a year.

Some of the student farmhands had speculated about a possible pregnancy, but none took it seriously.

Sydney Day, a senior animal science major from East Greenwich, said: “Over the winter we started to mention that she was getting kind of chunky, but we thought it was just that the extra food they get to keep warm in winter was sticking to her in unflattering ways.”

Voelkner and Day agree that Jenny has been an excellent mother to the unnamed foal in its first few days of life.

“Jenny has been a super protective mom since the moment we found the little one, glaring at any cow who dares to look at her baby with even the slightest glance,” Day said.

Voelkner added: “The baby is starting to get more curious around other people, but Jenny is very watchful.

“In the past few days I’ve seen Jenny and the baby lying next to each other, Jenny grooming the baby as they soak up the springtime sun.”

Peckham Farm has sheep, cows, pigs and goats that are used as part of the university’s animal science and pre-veterinary classes.