A rare Hartmann’s Mountain Zebra foal has been born at Virginia Zoo in the US. The filly’s birth is significant birth for the species as it is threatened in the wild and there are fewer than 60 captive individuals in the North American Species Survival Plan (SSP). 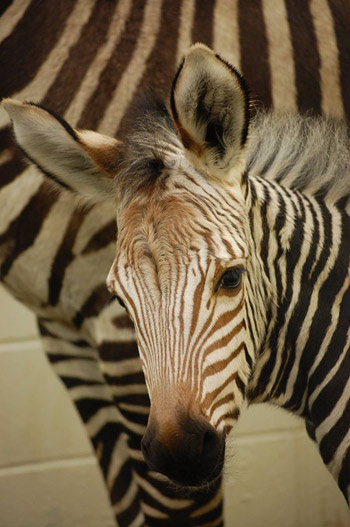 The filly foal was born on Monday to 14-year-old Abbey, and four-year-old father Zack. It is the second foal for Abbey and the first for Zack.

“We are optimistic that this youngster will thrive and be an important member of the Hartmann’s Mountain Zebra SSP population.”

Abbey and her new foal will be on show at the zoo from about May.

Hartmann’s Mountain Zebras are listed as a vulnerable species by the International Union for Conservation of Nature.

The international studbook for the species listed the total population in 2011 at about 8300, with 177 in captivity.

Studies indicate this number could decline by more than 10 per cent in the next 25 years due to an increase in hunting and loss of natural habitat to agriculture.

Hartmann’s Mountain Zebras (Equus zebra hartmannae) are native to Namibia and most commonly found in the extremely harsh environmental conditions of the Kunene Region in the North West. Numbers are expected to decline, largely driven by an increase in hunting and loss of natural habitat to agriculture. Most groups live outside national parks on private land and ranches.

They are a subspecies of the Mountain Zebra (Equus zebra), and range from 10 to 14 hands in height They are unusual in that they are the only equine with a dewlap.