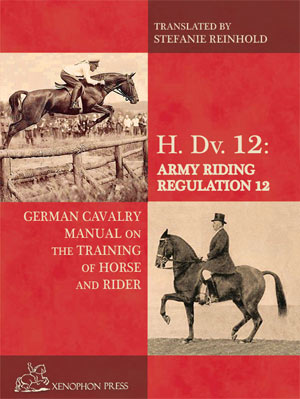 The modern histories of dressage and mounted warfare enjoy an intimate relationship. Codified in the sixteenth century, dressage as the systematic training of horse and rider found its necessity in warfare and evolved thereafter primarily with and for military application. (This denies neither that dressage served other purposes nor that haute école dressage primarily served those purposes, developing more as art form confirming social prestige than as martial art determining the fate of empires.) Giovanni Battista Tomassini credits Massari Malatesta’s Compendium of the Heroic Art of Chivalry (1599) with synthesizing the principles of Federico Grisone and other early dressage theorists and adding the first “overview of the use of the horse for military purposes.” As Tomassini writes, “Massari underlines the importance of the horse’s agility and obedience to dodge the opponent and immediately gain the advantage to hit him, both in combats with the gun and with the lance.” Whether or not Massari was the first to emphasize that importance, he was far from the last.

The rich body of work on cavalry training of horse and rider produced in the 17th through 19th centuries—particularly work in the latter two centuries pertaining to light cavalry and saber exercises — stresses the indispensible need in mounted warfare for agile and obedient equines developed through systematic dressage. In Remarks on Cavalry (1798), for example, an important treatise on cavalry tactics, the Prussian Major General Emanuel von Warnery repeatedly points to the agility and obedience of the horse as critical to successful maneuvering of detachments in the field — whether adjusting formation through “wheeling” or deploying the “shock force” of the charge at speed. In Cavalry: Its History and Tactics (1853), Captain Louis Edward Nolan brings this down to the individual combatant. Because cavalry charges resolve themselves into one-on-one mêlées, “the unfortunate fellow who cannot manage his horse is lost.” A “fight on horseback is like a fencing match,” Nolan writes. “All depends on horsemanship.”

Like dressage, horsemanship encompasses many levels of expertise and refinement. While Nolan insists that the cavalry horse and rider must be trained in movements like the pirouette in order to prevail in mêlées, for example, he dismisses haute école airs like the ballottade or capriole as “useless.” (In Nolan’s view, indeed, hunting — particularly in the English style — is at least as important as manège schooling in preparing riders and horses for cavalry service.) Dubious about the value of classical “academic” dressage and horsemanship to mounted warfare, Nolan not surprisingly embraced the New System developed by François Baucher and, in The Training of Cavalry Remount Horses, a New System (1852), essentially translated and modified Baucher’s Méthode d’équitation basée sur de nouveaux principes (1842). That controversial New System, meanwhile, established Baucher as the chief rival to the Comte d’Aure, no classicist himself, in determining the direction of dressage at Saumur, the school for the training of French cavalry.

France, of course, is not Germany — in horsemanship as in many other things — and particularly was not in the middle third of the 19th century. While the heterodoxies of d’Aure and Baucher contended for supremacy in Paris, classical dressage orthodoxy held firm in Berlin. In 1853, Louis Seeger, the distinguished German dressage master, theorist, and follower of François Robichon de la Guérinière, published the polemic, Monsieur Baucher and his methods — a serious warning to the riders of Germany. Seeger passed on to his students both his commitment to classicism and rejection of Baucherism. Those students included Seeger’s brilliant protégé Gustav Steinbrecht, who would go on to write The Gymnasium of the Horse (1886), a landmark in German dressage theory. The ensuing clash between French romanticism and German classicism, as embodied in the contrasting systems of Baucher and Steinbrecht, would prove more than a local, nationalistic squabble. It would inform the future of dressage, and with it cavalry training, in the 20th century.

Steinbrecht’s Gymnasium influenced H. Dv. 12: Army Riding Regulation 12, the work that concerns us and that has played and continues to play a pivotal role in the recent history of dressage in Germany. Richard Williams explains in his Preface to the Xenophon Press edition of H. Dv. 12 that German cavalry regulations dating to the 18th century were consolidated in 1882, revised in 1912 and 1926, and published in this 12th version in 1937. Significantly, the revision of 1912 “introduced Riding Provisions that were substantially the work of Gustav Steinbrecht” as developed in his Gymnasium (perhaps coincidentally, the 12th version of the regulations followed the revised Fourth Edition of the Gymnasium by only two years). Those regulations continue to exert influence. As Christoph Hess adds in his Foreword, “after World War II, the teachings of the H. Dv. 12 served as the basis for the ”Principles of Riding and Driving” of the German National Equestrian Federation (FN).” Though the FN Principles handbook often has been updated, Hess notes, the “actual core of the content” remains that of H. Dv. 12.

Xenophon Press has performed an invaluable service to the contemporary dressage community — instructors and riders, trainers and scholars — in publishing this first English translation of H. Dv. 12. As a specimen of book-making, it is one of Xenophon’s best efforts: the English of Stefanie Reinhold’s translation is limpid, exact, and a pleasure to read; editorial notes and comments are held to a fit and bare minimum; and the many illustrations from the original publication (complete with German legends) not only represent their points clearly and concisely, but also give the book a handsome look and a period flavor. As a manual for training horse and rider, H. Dv. 12 is rewarding both to study and to use. What initially might seem to be obscure mid-20th-century German military regulations, in short, turn out to be, and for many reasons, a rich intellectual and practical resource and a very good “read.” If you like the elegance of simplicity, you will like this book. 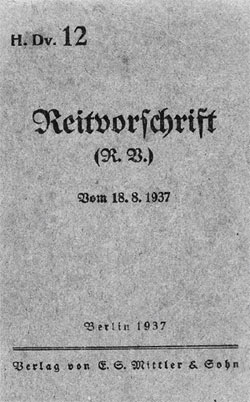 Military necessity and German precision, that is, combined to produce a straightforward manual that avoids both obfuscation and lax prose. It begins with the clearest of premises: “War requires that the rider securely controls his horse on cross-country rides, and that the horse possesses obedience, agility, and endurance. The goal of schooling rider and horse is to fulfill this requirement.” And it defines a key term with equal clarity: “in order to be able to fulfill all requirements that military duty demands of a war-ready cavalry horse, the green horse’s body needs to be systematically developed by means of gymnasticizing, and the horse needs to be carefully educated. Both elements combined are called dressage.” In the rigorous style of German treatises in general, H. Dv. 12 unfolds in five basic parts (General Remarks, Riding Theory, Schooling of Horses, Schooling of the Rider, Special Provisions), subdivided into 16 topical sections, further subdivided into 102 numbered passages of varying length. It is virtually impossible to get lost or to miss how one point leads to the next. Accompanying the text are the many illustrations and diagrams already mentioned, plus multiple exercises and detailed schooling plans.

H. Dv. 12 also offers something beyond its practical value: it exemplifies and illustrates two historical dynamics. It reminds us how dressage theory became military application that informed subsequent dressage theory and so on. It also reminds us that dressage, as a result, participates in the history of its application — both for good and for ill. We should not forget the role, large or small, that dressage and H. Dv. 12 played in the modern German war machine, any more than we should forget the role that dressage and cavalry regulations in general played in the imperial and colonial adventures of the great powers. Neither a criticism nor even a caution, this is simply a call to memory.

“How German is it” is borrowed from the title of a novel by experimental American novelist Walter Abish, a friend of the reviewer.