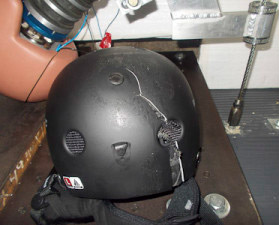 Add-ons to helmets such as outer soft-shell layers, spray treatments, helmet pads and fiber sheets may not significantly help lower the risk of concussions in athletes, according to a study released this week in the US.

The study, focusing on football helmets, will be presented at the American Academy of Neurology’s 67th Annual Meeting in Washington, DC, April 18 to 255.

Study author John Lloyd, PhD, of BRAINS, Inc, said that despite many products targeted at reducing concussions, “there is no magic concussion prevention product on the market at this time”.

Lloyd, who is based in San Antonio, Florida, is a member of the American Academy of Neurology.

In the study, researchers modified the standard drop test system, approved by the National Operating Committee on Standards for Athletic Equipment, by using a crash test dummy head and neck to more realistically simulate head impact. Sensors were placed in the dummy’s head to measure linear and angular rotational responses to helmet impacts at 10, 12 and 14 miles per hour.

The study found that compared to helmets without the add-ons, those fitted with the Guardian Cap, Concussion Reduction Technology and Shockstrips reduced linear accelerations by about 11 percent, but only reduced angular accelerations by 2 percent, while Helmet Glide was shown to have no effect.

“These findings are important because angular accelerations are believed to be the major biomechanical forces involved in concussion,” Lloyd said. “Few add-on products have undergone even basic biomechanical evaluation. Hopefully, our research will lead to more rigorous testing of helmets and add-ons.”

The study was supported by BRAINS, Inc. and Seeing Stars Foundation.