This weekend Austria hosts the FEI World Cup Vaulting final, where 20 of the world’s best athletes from 20 nations will be vying for honours. 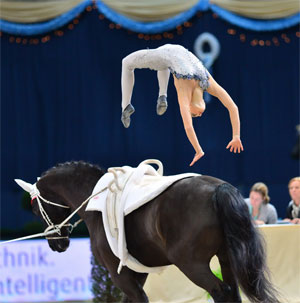 Reigning champion Anna Cavallaro (ITA), responsible for inspiring many girls in Italy to take up vaulting, is seeking to score an hat-trick at Fest der Pferde in Graz.

But the competition will be strong, especially from the youngest athlete in the Final, 19-year-old Lisa Wild (AUT) with her famous back flip, who will be putting the ‘pedal to the medal’ for the individual female honours, after her taste of glory at the Salzburg (AUT) and Munich (GER) qualifiers.

Great surprises can come up at the Final, where all athletes start from scratch on points, and every single movement in the 80-second performance takes on a huge significance.

Swiss champion and businesswoman Simone Jäiser is only too aware of this, and after coming second in two qualifiers – the series opener in Munich (GER) and the third leg in Salzburg (AUT) – she finally vaulted onto the top of the podium with a brilliant performance in the last qualifier at Leipzig (GER).

“I’m aiming to show clear rounds in Graz and I have no doubts now that this will be possible,” said Jäiser confidently in Leipzig. 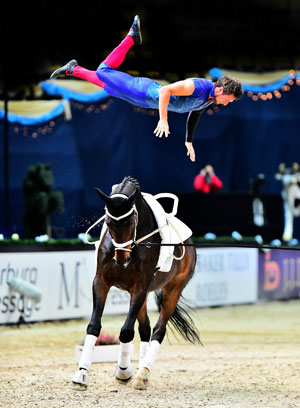 FEI World Cup Vaulting champion Nicolas Andreani (FRA), will be a force to be reckoned with in Graz after effortless wins on two different horses during the series – Just a Kiss in Paris (FRA) and Ramazotti in Salzburg (AUT). The 31-year-old international star known as “Nico” to his many fans, is aiming to end his glittering career on a high at this Final.

Also on the hunt for the title are the brothers Viktor and Thomas Brüsewitz (GER).

While Viktor, world number three, won the opening qualifier in Munich (GER), his brother claimed victory at the last leg at Leipzig.

Austria’s Jasmin Lindner and Lukas Wacha (AUT), FEI World Cup Vaulting champions and gold medallists at the Alltech FEI World Equestrian Games 2014, will be striving to keep hold of their title at this Final after finishing second at the Munich and Salzburg qualifiers. The competition is expected to be tight, with Germany’s Gera Marie Grün and Justin Van Gerven, and The Netherlands’ Carola and Esther Sneekes, qualifying for this Final with the same number of victories and points.