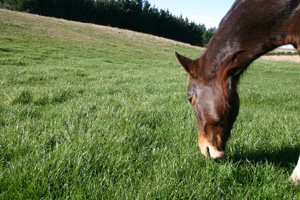 Hair analysis has proved its worth as a measurement tool for evaluating the mineral status of individual horses, according to researchers in Iran.

Mane hair proved to be a better biological indicator than serum in assessing the mineral status in horses.

The scientists, from the University of Guilan in Rasht, said their work provided baseline data on hair and serum mineral levels in healthy horses.

Assistant professors Ardeshir Mohit and Hassan Darmani Kuhi, and doctoral student Ahmad Ghorbani, said that, in some cases, the ratios between elements can be used to determine mineral status in horses.

The aim of their study, the findings of which were published online this month in the Journal of Equine Veterinary Science, was to determine the effects of dietary mineral intake on serum and hair mineral contents in healthy horses.

Twelve horses were used in a balanced change-over design experiment involving three 56-day periods, with a seven-day interval between each period. The different phases of the study involved different levels  of mineral supplementation and dry matter intake – what the researchers referred to as dietary treatments.

Mane hair and serum samples were collected at the end of each period and measured by the inductively coupled plasma optical emission spectrometry method.

The mineral contents of serum, except for copper and strontium, were not affected by the dietary treatments, the trio found.

However, the effect of dietary treatments on hair was significant in respect of concentrations of calcium, cobalt, copper, iron, potassium, magnesium, manganese, sodium, phosphorus sulfur, selenium, strontium and zinc. They found higher values for these element when the horses were on mineral-supplemented diets that provided 100 percent of their requirements.

The effect of age on hair concentration of calcium, cobalt, copper, iron, potassium, magnesium, manganese, nickel, led, sulfur, selenium, strontium and zinc was not significant. The exception was phosphorus. Concentrations and ratios of calcium/potassium, zinc/copper, calcium/lead, and sulfur/lead were also not significantly affected by age.

For gender, the ratios of calcium/lead, iron/lead and sulfur/copper in the hair samples were higher in males than females.

Hair, they concluded, proved to be a better biological indicator for mineral status in horse than the serum.