Einstein’s completed quote is, “After a certain high level of technical skill is achieved, science and art tend to coalesce in esthetics, plasticity, and form.” 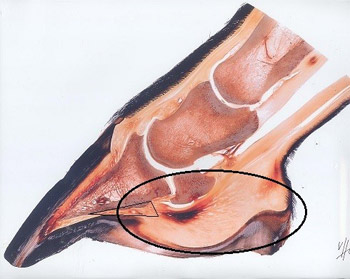 The scientist who completed this “masterpiece” is undoubtedly an artist but the real beauty of the picture is that the new generation of research, science and art coalesce for the prevention of injuries. Dr Betsy Uhl, DVM, PhD, is preparing the next Science of Motion International Conference, to be held October 3 and 4, 2015 at the SOM training center, and this beautiful illustration demonstrates how the study of “entheses” – which is the name given to the areas where tendons are inserted on bones – can prevent the development of navicular syndrome.

As you know, the science of motion does not believe that riders have baby brains that have to be fed with baby food. While the general consensus is repeating infantile theories, we provide instead pertinent information, often the cutting age of equine research studies. Other studies are published but the superiority and trademark of the Science of Motion is the practical application. We are not afraid to question traditional beliefs in the light of new knowledge. Indeed, updating riding and training techniques to advanced scientific discoveries greatly further riders’ and trainers’ ability to prevent injuries.

New equine research studies focus on preventing the disease and the study that Dr Uhl is developing is going to blow the minds of those who attend the 2015 Science of Motion International Conference.

Pictured at left is an illustration of a damaged navicular bone. There is no need to discuss the fact that preventing such damage is a thousand times more efficient than trying to deal with an affected distal sesamoid bone.

Preventing involves the capacity of interpreting early signs and the new generation of  “entheses” studies provides amazing perspectives. Entheses is the name given to the area where elastic structures such as tendons, are inserted to bones.

All the area below the navicular bone is loaded with receptors. There is a very large number of sensors, which is understandable since a great percentage of the forces coming from the body down to the hoof through the limb is acting on the heel area. On the next picture, the area with the very large number or receptors is surrounded by an oval. One member of the team, who is not a rider, theorized, “This is how the hoof control the gaits?” Dr Uhl, who is an advanced rider reacted immediately placing her fingers like a hoof capsule and pushing energetically her hand down. Gravity is not acting from the hoof up into the leg. Gravity is acting downward, from the body mass down to the heel through the bony column of the limb.

The large quantity of sensors is there to measure impact forces. The dark red area that you can see just under the navicular bone is an area of the deep digital flexor tendon that is damaged by intense stress. At this point, the navicular is not damaged and this is where are the value of these entheses studies. The pain is there, but x-rays will not show yet, navicular change. The horse will then likely be diagnosed as having a bruised heel. It will be given bute, advised some rest, or put back to work.

The warning is there.

In his study on dancers and musicians, Boni Rietveld wrote that dancers know their body and watching them practicing a movement and identifying the source of the kinematics abnormality allowed identification of the site of damage before advanced technologies could even show it.

Horses express pain the same way but primitive riding and training techniques dismiss the information as behavior. When I saw the damage on the deep digital flexor tendon immediately under the navicular bone, I had in front of my eyes a suspicion that was in my mind for years. I never truly believed in the diagnosis of bruised heel. I saw the discomfort lasting for a long period of time and not truly responding to drugs and hoof care. When I was asked to deal with such problem, I always looked for the kinematics abnormality, identified the source and focused on correcting the root cause. Of course proper functioning of the hoof capsule is necessary. In fact, one of the speakers of our 2015 international conference is a very talented and sophisticated farrier who is going to explains and demonstrates how the hoof works.

For the members of the In-Hand Therapy course who have watched our case study on navicular syndrome, one of the five horses, a paint horse, did not show navicular changes on radiographies but exhibited the kinematic abnormalities that have led other horses to the disease. We approached the problem as if it was another case of navicular syndrome and we restored proper limb kinematics by identifying and correcting the root cause. The horse became sound and never developed later in his life any navicular issue. This horse was very probably a case where the deep digital flexor tendon was damaged as in the picture, but we corrected the kinematics abnormality before it started damaging the distal sesamoid bone.

Register here to learn more about the 2015 Science Of Motion International conference.