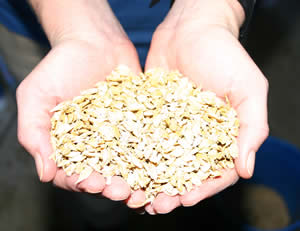 Horses were more reactive on a high-starch diet than on a high-fibre diet, British researchers have reported.

The University of Glasgow researchers said increasing performance work in horses was often associated with a reduction in the forage ration and an increase in concentrates, usually high-starch cereal grains.

“This type of diet has been associated with stereotypic behaviours and health problems,” Louise Bulmer and her colleagues reported in the journal, Applied Animal Behaviour Science.

High-starch diets are associated with a high glycaemic response, which has been hypothosised to cause increased reactivity in horses.

The researchers assessed the horses’ responses under each diet to novel stimuli and handling, paying particular attention to the animals’ heart rates

Each diet was fed to each over over a 28-day period.

Horses were found to have significantly higher average heart rates, and maximums, in the handling test while on the high-starch diet, compared to the high-fibre diet.

Maximum heart rates were found to be significantly higher for the novel stimuli test when the horses were on the high-starch diet.

“Results demonstrate that the high-starch diet had some effect on the reactivity and handling behaviour of horses, in particular their heart rate reactivity,” the researchers reported.

Bulmer was joined in the research by Sebastian McBride, Katie Williams and Jo-Anne Murray.