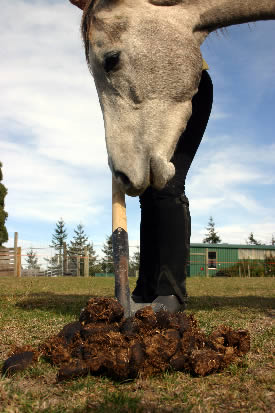 A startup company that specializes in sending horse manure to nominated recipients made more than $US10,000 in its first month, it has been revealed.

Shit Express provides packaging, shipping and will add a personalized message as part of its service.

The manure is packaged in a way that ensures it arrives fresh.

Its chief executive, who blogged under the name, Peter, described the rapid rise of the company in a blog on its website.

The shit-in-a-box company began by accepting payment in bitcoins, but will now take cash via Paypal.

Peter admitted to being something of an internet pioneer, saying: “Not all projects turned into massive success. Nevertheless, starting 3-5 projects a year, I’m pretty sure at least one of them could succeed.

“The idea of sending poop in mail (either fake or real) wasn’t new to me. It’s easy to find thousands of unusual, crazy, useless, odd or worthless businesses around.

“But I was curious; what if such an idea became global success, with people talking about it in random places around the world?”

His business has certainly gained attention, with mentions in social media and other websites driving traffic to his website.

At one point, the website received 116,620 visitors in three days, in what was to be the beginning of what he called a “shit explosion”.

“The website was translated to 24 languages and the customer support is now handled in seven languages.

“The website welcomes up to 7000 visitors per day and we continue to fill new orders.”

Since getting started Peter has started offering Paypal as a secondary means of payment for the 36 different countries where he ships his horse poop.

However, it remains unclear at this stage whether biosecurity border officials in the host of countries to which Shit Express delivers are overjoyed at the prospect of receiving manure shipments.

Peter says the company has so far delivered its product to 36 countries.