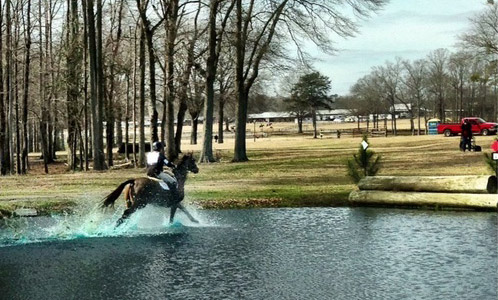 Rolex Kentucky 3 Day Event course designer Derek di Grazia has put his mark on the upper level cross-country courses at Georgia’s Pine Top Farm, with a redesign of all the water complexes and major earthworks to ready February’s event.

Di Grazia, who is designing the Training, Preliminary and Intermediate courses for the event, traveled to Thomson, Georgia in the winter of 2014 before he agreed to design Pine Top’s course on the property of Glenn and Janet Wilson.

“It’s a great piece of property, especially for what we do. In our world, it’s very open and allows the horses to gallop and has good terrain. Glenn has also created some terrain here so it really lends itself to being able to have a really great course,” di Grazia said.

His vision for Pine Top included redesigning all of Pine Top’s water complexes by enlarging and de-revetting the main water complex.  Significant earth=moving work was completed over the summer to create gently slopping edges to water complexes, which reflects di Grazia’s style.

US and Canadian riders competing for a spot at Rolex will now be able to ride di Grazia’s course at Pine Top Farm before taking on his course at Kentucky.

“I’ll bring some new lines and new ways of going around the property,” di Grazia said. “When you bring somebody new in you’re hoping to get a little bit of a different look at the property. That’s what I intend to do.”

The February 6 Intermediate event at Pine Top will also include novice divisions, with that course designed by Jeff Kibbie. The training division will be included in the February 20-22 Advanced/**/*  Pine Top event.

Glenn and Janet Wilson are enthusiastic about the 2015 season. “While we are bringing in the best of the American designers, we are careful not to lose the Pine Top casual atmosphere. You can’t wake up one day and build a place like Pine Top. There’s 250 years of history here that sets Pine Top apart from all other events in our area,” said Glenn Wilson, whose family has owned the farm for eight generations.