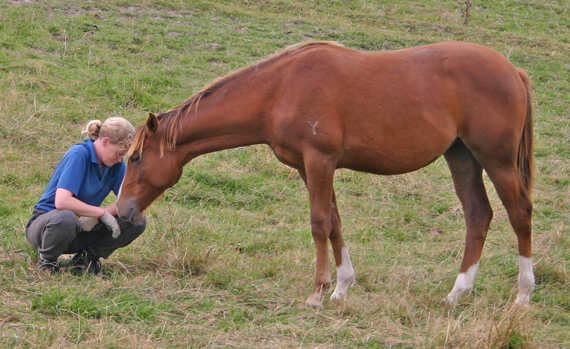 The scientists found a raft of benefits among the 10-month-old Welsh horses who enjoyed an enriched lifestyle, when compared to nine control horses who had far less turnout time from their stables and a duller routine.

The researchers, whose findings have been published in the open-access journal, PLoS ONE, found that the horses enjoying an enriched environment were less frightened by novelty items, and showed less avoidance reactions toward touch, human presence, and handling. They found the horses had higher levels of curiosity, too.

By contrast, the horses whose lives were enriched were stabled only from 9am to 4pm daily. The rest of the time they lived together on pasture. Their diet was more varied, and they were regularly introduced to novel objects both in the pasture and in the stalls. Three times a week, they were led individually with a halter to different unknown locations for 20 minutes.

Léa Lansade and her colleagues even found what they described as a more favorable biological profile when analyzing the blood of environmentally enriched horses.

For the study, ten 10-month-old horses were subjected to an enriched environment for 12 weeks. They were housed in large individual stalls on straw bedding for seven hours a day and spent the rest of the time together at pasture.

They were fed three times a day with flavored pellets, hay, or fruits, and were exposed daily to various objects, odors, and music.

The control group of nine 10-month-old horses were housed in individual stalls on wood shaving bedding. They were turned out into individual paddocks only three times a week and were fed three times a day with pellets or hay.

The researchers identified many tangible benefits from the enriched environment.

Environmental enrichment clearly and durably modified the personality of horses, the researchers reported, particularly in relation to fearfulness, tactile sensitivity, and reactivity to humans.

In particular, they were less frightened by novel objects or challenges.

It was found that the horses enjoying an enriched environment also showed fewer tendencies to try to avoid touch, human presence, and handling. “These changes reflect broader effects than the classic effects on anxiety,” Lansade and her fellow researchers reported.

“Taken together, these observations seem to demonstrate a more positive perception of the environment, whether it concerns potentially frightening stimuli or non-frightening ones, or the human presence.

“In contrast, control horses perceive their environment as more threatening and attempt to avoid these stimuli.”

The enriched horses were found to be more likely to interact with a novel object and with passive humans, suggesting they had a higher level of curiosity.

There was evidence that the positive effects on fearfulness and sensitivity persisted for at least three months after the end of the treatment.

The enriched horses also showed better performance in solving a cognitive task that required focused attention. “This better ability could be related to the change of their personality,” they suggested.

“Indeed, a relationship between a low level of fearfulness and high performance in instrumental learning has been described [in other research], and is explained by the better focus of attention on the task.”

The enriched horses appeared to be more attentive and more prone to detect the cues given by humans in the assigned task. “These effects can explain the better performance,” they reported.

A reduced expression of stress indicators suggested that the environmental enrichment also improved well-being, the researchers reported. Blood analysis not only showed lower levels of cortisol – an indicator of stress – but the better lifestyle also appeared to induce the expression of genes involved in cell growth and proliferation.

“Changes in both behavior and gene expression may constitute a psychobiological signature of the effects of enrichment and result in improved well-being,” they wrote.

“This study illustrates how the environment interacts with genetic information in shaping the individual at both the behavioral and molecular levels.”

Their findings supported the use of environmental enrichment for improvement of the well-being of horses as well as security of the handlers.

There were, they said, noticeable differences between the horses in the group whose lives had been enriched and the control group, not only on a behavioral level, but in terms of well-being, personality, and learning ability.

The effects on well-being were particularly noticeable, they said.

Eating problems were present in four out of the nine control horses, but there were none among the horses whose lives were enriched.

All these indicators pointed to a lower level of perceived stress and better well-being in the enriched horses, they said.