John Holland, the president of the Equine Welfare Alliance, examines possible scenarios following the European Union’s ban affecting horsemeat shipments from Mexico. He predicts short-term instability, but believes the US market could not hope for a better set of circumstances to kick on and put the slaughter trade behind it.

The US horse industry was hit with the news this week that it would no longer be able to dump its excess horses to slaughter in Mexico.

Effective from January 15 next year, the horse slaughter plants in Mexico that formerly met European Union (EU) operating standards will no longer be allowed to slaughter horses for shipment to that market.

Additionally, on December 10, the US Congress passed a continuing spending resolution that extends the prohibition on slaughter for human consumption within the US through the 2015 fiscal year.

US horse slaughter plants were closed in 2007, but the number of US horses slaughtered for meat did not drop. Rather than traveling to domestic slaughter houses, shipments of horses headed over the borders to slaughter in Canada and Mexico. 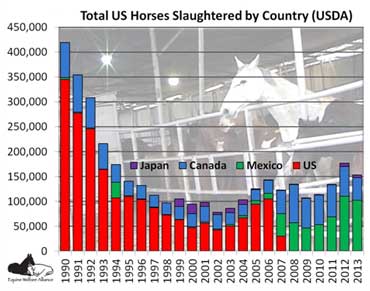 Warnings surfaced at the end of November that the EU was going to shut off the import of horsemeat from Mexico and perhaps Canada, over issues of food safety. The warnings were followed on December 10 by the announcement that the EU will no longer accept Mexican horsemeat from animals killed after January 15.

The ban becomes effective shortly after the Christmas-New Year week in which exports are usually negligible, potentially minimizing the number of remaining horses that will go to Mexico.

The EU issued the ban after Mexico failed to meet long-standing EU food safety standards, stemming largely from the fact that the US has no system for tracing horses or the drugs they have been administered.

The magnitude of the impact

The EU’s Food and Veterinary Office (FVO) audit that triggered the ban estimated that 87 percent of horses slaughtered in the EU-licensed Mexican horse slaughter plants are US horses. US Department of Agriculture (USDA) export figures indicate that 66.9 percent (102,254) of all US horses sent to slaughter in 2013 went to Mexico; twice as many as went to Canada. A similar ban is expected on Canadian horsemeat in the coming months.

In addition to food safety issues, the audit found that the transport of the horses to slaughter did not meet EU humane treatment standards.

The US portion of the trip endured by these horses is supposed to be monitored by the USDA Animal and Plant Health Inspection Service (APHIS). Records show that horses have been routinely rejected at the border by Mexican authorities for reasons ranging from disease to lameness and blindness.

After a decade of false starts and stops, the reality of the decision came as a shock. The impact has yet to ripple down to those associated with the pipeline, much less to the businesses and auctions where the horses originate and are aggregated.

To be clear, Mexico will still be able to accept and slaughter US horses. Although the EU is its main customer, a portion of their horsemeat goes to Russia and other countries.

Since Russia reinstated Mexican horsemeat imports, it has imported only about 6.6 percent of the horsemeat exports of the EU-approved plants in Mexico. It seems unrealistic to expect Russia to absorb the horsemeat that the EU will no longer accept.

Another possible alternative is the many small regional horse slaughter plants in Mexico. These crude facilities slaughter horses for domestic consumption, but their individual throughputs are low. These plants have almost no safeguards, and usually slaughter local horses; however they do not pay enough per horse to be an attractive long-term alternative to the EU plants.

The suddenness of the announcement has led many on both sides of the slaughter issue to ponder what will happen to the horses caught in the pipeline and how the US horse industry will react to this change.

Factors driving the low-end horse market and recent trends in horse breeding, as documented in the Equine Welfare Alliance (EWA) annual Equine Welfare Report, suggest that while there may be temporary negative impacts, the decision comes at an opportune time.

The factors producing this opportunity include breeding trends, fuel prices and new land use policy.

The breeding of US horses has been in steep decline since 2005, with some breeds down 75 percent, and all breeds off at least 50 percent from their ten-year highs.

Before the EU announcement, the Equine Welfare Alliance was seeing evidence that low-end horse prices were at last recovering and anticipated that breeding was poised to begin increasing in the years ahead, so the timing is almost perfect. 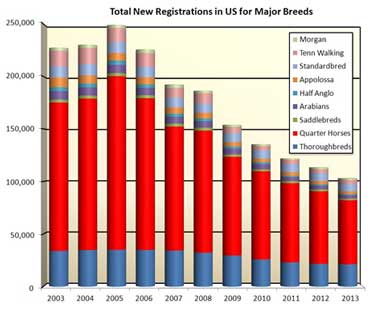 Earlier research found that equine welfare and the market for low-end horses are most dependent on the price of hay, and considerably less dependent on the state of the economy (as measured by unemployment). This explains why breeding did not recover even as the broader economy lumbered upward. The high hay prices in turn can be attributed to a combination of weather and fuel costs in the short term and land use policy in the long term.

Because of persistent drought and past land use policy, hay prices in many western states have been on a decade-long upward trajectory far beyond the consumer price index or other indicators. The tremendous impact of this trend can be seen clearly in data from Colorado.

Weather, as it impacts hay production, is the one factor that is likely to remain problematic. Much of the southwestern US has been hit by persistent drought, and predictions are that this will continue to be the pattern due to climate change.

The US maintained subsidies for ethanol production for almost 30 years, but production was insignificant. After 2005, the price of gasoline reached a point where ethanol was economically attractive and it began to be used as an additive at a greatly increased rate. The demand for corn to produce this ethanol skyrocketed, causing land to be taken out of hay production and put into corn production. This put upward pressure on hay prices. 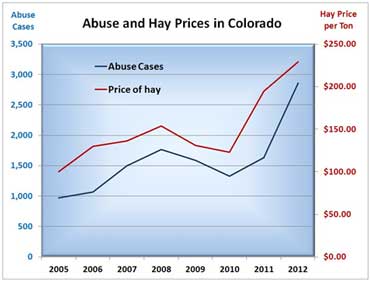 Two things, however, have dramatically improved this trajectory in the past two years. First, in 2011 Congress removed the ethanol subsidy and took down tariffs on the import of sugar cane that competes with domestic corn for the ethanol market. Secondly, the price of crude oil fell drastically as domestic production increased and natural gas began to infringe on many oil markets.

As a result of these changes, the production of hay and alfalfa has been increasing since 2012 and will in all probability continue to increase in the next few years as land is taken out of corn and put back into hay production. With more production, there will be downward pressure on hay prices, making horse keeping more affordable, and increasing the demand for pleasure horses.

After a decade of decreasing foal production, there should be a pent up demand for pleasure horses as they once again become affordable.

Why there are excess horses

In a normal market economy, supply balances with demand. No manufacturer will produce more of a product than the market wants at a workable price. So why is the horse industry different?

To understand why we produce excess horses, one must understand the channels through which horses flow to slaughter. Most slaughter horses are sport horses at the end of a very short career (3 to 5 years old). These horses were bred to meet the demands of the racing and rodeo venues, and not the market for long-time horse ownership. 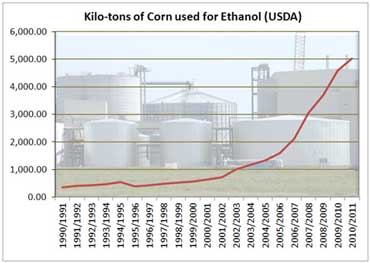 The demand for sport horses is determined by wagering revenues or ticket sales, not the cost of keeping them. The demand for recreational horses, on the other hand, is set largely by the cost of horse keeping, most notably the price of hay. Add to this the effect of speculative (lotto) breeding, and the result is a regular supply of excess horses.

While a privately owned horse may be sold on Craigslist or through a classified ad, these former sport horses are usually consigned to auctions where they are run through as “loose horses”, meaning they are shown without riders. Bidders get no chance to see if the horse is even saddle trained. So even when there is a market for them, many horses have no chance to reach it.

The auctions themselves have become an anachronism, and the fact that they are commonly operated by the Amish assures they will remain so. The impact of the ban will fall almost entirely on this handful of auctions. Low-end horse prices will fall, and the sellers will need to rethink their strategy for getting rid of them. With any luck, entrepreneurs will gravitate to this opportunity to pick up inexpensive horses, and sell them into the recreational and show markets. 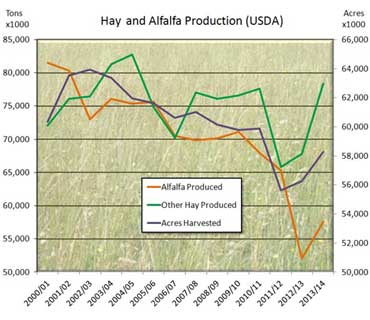 It must be realized that all of these factors are relatively smooth and gradual whereas the closing of the EU market to US horses will be abrupt. In complex systems like the horse market, abrupt changes will undoubtedly cause significant short-term instability, but as bumpy as the road ahead may be, we could not ask for a better set of circumstances under which to endure it.