It looks like a cross between a horse, an ostrich and a camel, making it one of the most implausible-looking dinosaurs ever unearthed from the fossil record.

But Deinocheirus mirificus was, indeed, real, and once roamed in the region that is now the Gobi Desert about 70 million years ago, during the Cretaceous period.

The six-ton creature was about 35 foot long. It had a horse-like head – although scientists say it had a beak and no teeth – and a hump on its back reminiscent of a camel. Researchers suspect the fin-like hump on its back may have been to help in cooling its body, storing fluid or fat, or may have been needed in some way to support its structure. 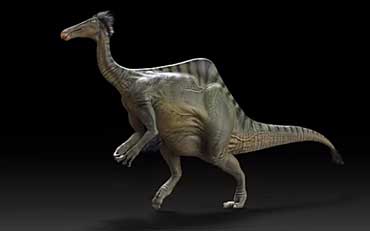 The findings of paleontologists, published in the journal Nature, have answered many questions about the curious beast.

Their exhaustive investigation even involved the tracing of stolen fossils. The dinosaur now appears to be different from what had been assumed: the animal may have had huge gripping arms and claws, but still was a non-dangerous omnivore.

On July 9, 1965, Zofia Kielan-Jaworowska, a member of the Polish-Mongolian Paleontological Expedition, discovered strange fossils in the 70-year-old Cretaceous emegt Formation at Altan Uul III, a remote area from the Gobi Desert in Mongolia.

A pair of gigantic 2.4-metre long forelimbs, armed with impressive claws, were unearthed and were assessed as belonging to a mysterious theropod dinosaur.

For nearly 50 years, this dinosaur, named Deinocheirus mirificus (“unusual terrible hands”), remained one of the most stubborn enigmas in paleontology.

Nothing except its huge arms and a handful of other bone fragments had ever been found.

Two new specimens of Deinocheirus were finally discovered in the Nemegt Formation of the Gobi Desert, in 2006 and 2009 respectively, by members of the Korea-Mongolia International Dinosaur Expedition.

But the excavation team was badly surprised when noticing that the skull and other parts of the skeleton of both specimens were missing, apparently poached by dino-hunters who roam the Gobi desert.

By chance, the skull and feet of the largest specimen were discovered in a private collection by Pascal Godefroit, a palaeontologist at the Royal Belgian Institute of Natural Sciences.

After negotiation with the owner of the specimens and Oyungerel Tsedevdamba, the Minister of Culture, Sport and Tourism of Mongolia, the poached fossils were finally returned to Mongolia in May this year.

After nearly 50 years, palaeontologists were finally able to reconstruct the whole skeleton of Deinocheirus and answer many questions.

With a body length of 11 metres and an estimated body weight of 6.4 tons, it is by far the largest dinosaur known that belongs to the ornithomimosaurs (“ostrich-like”), a group of omnivorous or herbivorous theropod dinosaurs that flourished during the Cretaceous.

Although ornithomimosaurs were usually small to medium-sized fast-running dinosaurs, Deinocheirus was a slow mover, as is indicated by its massive hind limbs and feet and its hip adapted for supporting a heavy body.

More than 1100 gastroliths were found inside its belly, together with fish remains, showing that Deinocheirus actively frequented the braided or meandering river systems of the Nemegt Formation.

The blunt tips of its pedal claws would have prevented its feet from sinking deep into wet substrates.

Teeth are absent and the adductor chambers for the masticatory musculature are strikingly small compared with its huge lower jaw; it is therefore clear that Deinocheirus could not generate powerful mastication.

It is hypothesized that perhaps it fed on relatively soft understory vegetation, or possibly herbaceous water plants.

The duck-like bill of Deinocheirus may be ecologically tied to water-based food as in ducks. Its long forearms with giant claws may have been used for digging and gathering herbaceous plants.

The long neural spines of dorsal and sacral vertebrae created a sloping, bony sail from the middle of the dinosaur’s back.

No other ornithomimosaur has been found with such a structure, but other unrelated dinosaurs — such as the semi-aquatic Spinosaurus and the iguanodontids Ouranosaurus have been found with similar sails.

Some paleontologists hypothesize that these structures supported fleshy sails that may have helped dinosaurs regulate their body temperature, while others suppose that the vertebrae supported a structure resembling the thick hump of a camel or bison.

Stephen Brusatte, a paleontologist at the University of Edinburgh in Scotland, told PRI.org that the researchers involved in the work had answered one of the biggest mysteries about dinosaurs, finally putting a head and a body to the massive arms first found 50 years ago.

It had a really long snout much like a horse, but no teeth. It was, he said, a freak. It wasn’t representative of a large group of dinosaurs that lived everywhere, but was a “local oddball”.

He agreed the animal was nothing short of “freaking weird”.