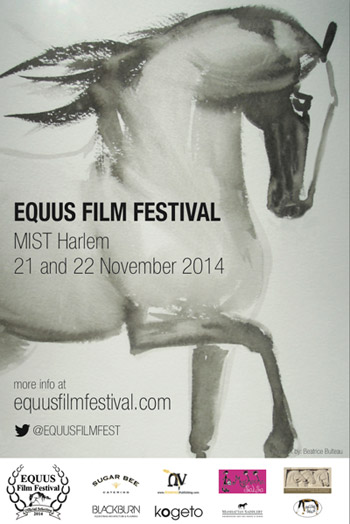 More than 100 horse films and media projects from around the globe are part of a weekend feast for horse lovers at next month’s Equus Film Festival in New York City.

It is the first independent film festival focused on equestrian content and includes full-length films, shorts, music videos, and commercials. Taking place on the weekend of November 21 and 22, tickets are $25 a day, and children under 15 free.

Equus Film Festival founder Lisa Diersen said the films will be screened in HD across three digital screens. “From Japan to France, the wilds of Mongolia to the inner cities, horses have a tremendous impact on our lives. The Equus Film Festival celebrates them in all their magnificence,” she said.

Saturday’s program will begin at 10.30am with free screenings for children and the community, with the main festival starting at noon and wrapping up at 9pm.

One of the first films up on Saturday morning is Black Rodeo, by director Jeff Kanew. The film includes such notable names as Muhammad Ali and Woody Strode, is returning to Harlem for the first time since 1972. “This is really a significant event, which will be free for the public,” Diersen said.

Dakota 38 will also be screened for free as part of a special celebration being held to honor Native American Heritage Month. This complimentary event will feature family-friendly media and free popcorn.

Other festival highlights include the 3D movie American Mustang, directed by Monty Miranda, Horse Tribe, a portrait of the Nez Perce tribe and a Navajo horseman, and Running Wild – the Life of Drayton O Hyde, shot in the Black Hills of South Dakota and western Oregon.

Equine therapy also features at the festival, with Horse & Rider – a Journey Toward Freedom, a documentary from India about two survivors of child prostitution who meet at a horse therapy programme; and a short doco Made in Heaven, about four miniature horses who are registered therapy animals.

The spotlight is on the city itself with the Liam Neeson-narrated Save NYC Horse Carriages, a 10-minute documentary supporting the controversial New York City carriage industry.

And photographer Robert Vavra has produced an hour-long film Such is the Real Nature of Horses, based on his book of the same name. In this film, Vavra reveals equine behaviors seldom seen and never before filmed.

The Black Turf Project, a short film, looks at the role of African Americans in thoroughbred racing. It will also air on US television and include a concurrent exhibition of the “Too Black Too Fast” art exhibit, at venues including museums, racetracks, schools, and theaters.

Sarah Chase, Chief Business Officer of Horse Lifestyle Media, which further developing the event into 2015, said the festival was helping bring to light the diversity of the horse world.

“This event works positively and powerfully through media to educate and overcome many elitist misconceptions,” she said. “The majority of the films, like the racing industry documentary The Black Turf Project and the Native American film Dakota 38, are dedicated to letting the true spirit of this global community shine through.”