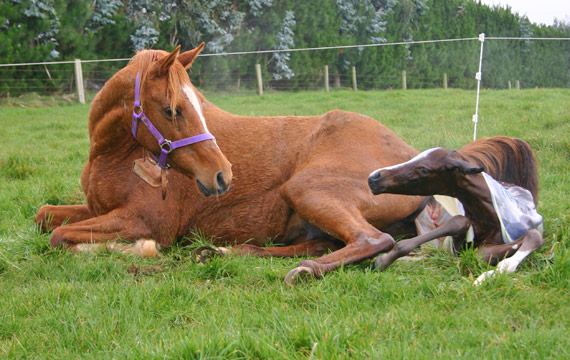 Researchers have developed a scoring system to assess the likelihood of critically ill foals surviving.

They say their system is a simple tool which can help determine the likely prognosis for survival of hospitalized newborn foals.

The American researchers, whose findings have been published in the open-access journal, PLoS ONE, said medical management of critically ill newborn foals can be expensive and labor intensive.

“Predicting the odds of foal survival using clinical information could facilitate the decision-making process for owners and clinicians,” Ramiro Toribio and his colleagues reported.

They said there were many prognostic indicators and mathematical models to predict the outcome in foals, but a validated scoring method to predict survival in sick foals had not been reported.

They set out to develop and validate a scoring system that could be used by clinicians using clinical data obtained on admission.

They analysed data from 339 foals less than four days old who were hospitalized at three equine clinics.

They assessed 37 variables to determine which ones should be included in the survival scoring system.

Of these, six were used in the final model, although not all are given the same weight in coming up with a final score.

The accuracy of the survival score was confirmed by using the system on another 283 sick newborn foals admitted to the same three hospitals. 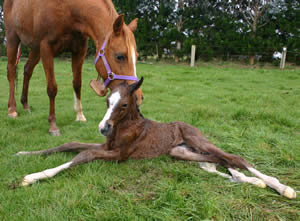 The factor that carried the highest weight in the scoring system was cold extremities. There was a strong association between cold extremities and increased probability of death, the researcher said.

The other factors were white blood cell count, glucose concentrations in the blood, Immunoglobulin G levels, whether the foal was premature (less than 320 days), and whether the foal had two or more sites of infection or inflammation.

The variables included in the survival score could be readily obtained on admission, making it practical in the clinical setting, the researchers said. “[It] can be easily implemented using data available in most equine hospitals,” they added.

The main reasons for euthanizing sick foals were a poor prognosis for survival, reduced ability to perform at an expected level, and financial limitations.

“In many instances this is a difficult decision for both clinicians and owners.

“Having access to a more objective method to estimate the likelihood of survival in hospitalized foals within hours of admission could be a valuable tool.”

The researchers stressed that the survival score should not replace clinical judgment and nor should it be used in isolation to make decisions about euthanasia.

“This information can be used by clinicians and owners to make informed, evidence-based decisions about treatment options for individual neonatal foals based on likely survival.”

The research was supported by the Morris Animal Foundation, Equine Research Funds at Ohio State University, and the Grayson-Jockey Club Research Foundation.

Toribio was joined in the research by his colleagues, Katarzyna Dembek and Samuel Hurcombe, from the College of Veterinary Medicine at Ohio State University; Michele Frazer from the Hagyard Equine Medical Institute in Lexington, Kentucky; and Peter Morresey from Rood and Riddle Equine Hospital in Lexington.

The study can be read here.