What’s the best second-hand vehicle for towing a horse trailer?

Years ago, when I was a motoring writer for a newspaper, this question was asked of me all the time. I used to occasionally road test second-hand cars and, to be honest, I got far more feedback from those stories than I ever did with a new-car test.

I guess that shows that most of us buy our cars on the second-hand market.

Vehicles have, of course, moved on from the 1980s, but I’ve maintained an interest in motoring matters, although I can’t say I’ve driven every new-car offering by any stretch.

Besides, the collective wisdom of Horsetalk users would be far better than anything I can come up with. Your comments are invited!

Here is my opinion across 10 vehicle models and categories. In some cases, I’ve posed some questions that I’m hoping readers will be able to answer.

Before I begin, a little disclaimer. All vehicles carry a manufacturer’s recommendation on the maximum weight they can pull, covering both braked and unbraked trailers. Towbars are similarly rated. Ratings will vary even within models, depending on engine size and whether they’re automatic or manual transmission. It may even vary with a higher or lower specification model, depending on things like wheels, tyres, and the overall weight of a vehicle. Regardless of what I say, or indeed anybody who takes part in the discussion, it is up to each of us as individuals to check the tow rating of a vehicle and the towbar, and decide for themselves whether they can hook on a single or double float, braked or unbraked, with one or two horses on board.

For what it’s worth, here are my thoughts: 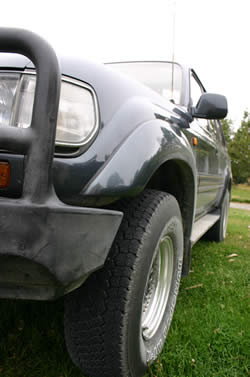 You’ll be hard-pressed to convince me that anything else out there beats a VX Limited Landcruiser for pulling a double float.

There’s no substitute for weight and the Landcruiser comes in at a beefy 2.5 tonnes. A fully laden tandem-axle double float is well within its tow rating. They’re comfortable and easy to drive, and the 4.2-litre turbo diesel has more torque than an hour-long infomercial. The permanent four-wheel-drive provides great traction and they’re fitted with big disc brakes all round for some serious stopping power with weight in behind. The pretty much standard-issue automatic transmission is legendary for its reliability and robustness.

Petrol versions are thirsty and the petrol engines before early 90s were pretty sluggish as well. Cruisers are not without their faults. The early VXs are prone to cracks around the chassis where the steering box mounts. The hub seals can be prone to leaking and there is much talk on the internet about the big-end bearings in the early Series 80 machines wearing out prematurely.

Is anyone aware of this being a problem in New Zealand?

The downside is that these vehicles are still very much in demand and command a premium. Even a 1990 VX (first of the Series 80) will set you back around $14,000, even for quite high mileage examples. Low mileage examples probably start around $17,000. There’s no such thing as a cheap, low mileage, VX Landcruiser. A mechanic told me the most common reason for having to overhaul a Landcruiser motor was poor maintenance: specifically, failing to replace weak rubber cooling horses. Eventually, one will bust and you’ll be seriously out of pocket. Be warned!

This is Nissan’s big competitor for the Landcruiser. Nissan and Toyota’s build quality are hard to beat. High spec examples of these are very comfortable and have more than enough pulling power for a horse float. They’re reputedly not as robust in the automatic transmission as a Landcruiser, so this is something to watch, especially if the second-hand example you’re looking to buy has done a few miles. I’m told overhauling an auto in one of these four-wheel-drives will cost you upwards of four grand. Ouch!

I doubt anyone would be disappointed in the towing performance of one of these four-wheel-drives, but they never quite achieved the legendary status of the VX Landcruiser.

I imagine a diesel Toyota Hilux ute would do a pretty reasonable job with a float, but I’m going to let readers rate all these guys, and there’s plenty of them: Nissan Navara, Mazda Bounty, Ford Courier, to name a few.

Smooth, powerful and quiet. Exceptionally comfortable. Plenty of towing power and great petrol power plants. Maintenance can be pretty costly, according to owners I’ve talked to, and, without sounding too disrespectful to our colonial fathers, they could learn a thing or two about build quality and ongoing product improvement from the Japanese.

Discoveries are probably the best value when you look at what you’re getting, but my biggest fear would be those ongoing maintenance costs. I’ll leave the rest to readers.

The bread-and-butter big family saloon, offering comfort, power and space. Good towing machine and plenty of weight for added stability. I wouldn’t rate the build quality on these in the same league as Toyota and Nissan, and I can’t say I’m a great fan of ANY car towing a double float with two horses on board, but if you’re going to, this would be one of the best cars to do it. It seems like the Falcon lineage goes back to the Treaty of Waitangi, but, seriously, older examples back to, say, the early 1990s, can start to pose problems. They sell for very reasonable prices but one serious breakdown and you’ll easily be up for more than the value of the car to put it right. I know of a few people who have had to have major automatic transmission work done. If you intend doing a lot of towing, having a cooler fitted to the automatic transmission to help keep the oil cool would be a wise investment.

Another big saloon with a proud place in Australasian motoring history. Let’s face it: you’re either in the Ford Camp or the Holden camp. Like the Ford, they’re big, powerful, and spacious. Like the Ford range, there are six and eight-cylinder variants. Neither will win you a fuel economy run, but then that’s not why you buy one, is it? In terms of towing a float, there’s not that much separating the Commodore and Falcon. In my view, it’s probably a narrow points decision to Ford.

Aren’t we getting a little small here to tow a double float? These are comfortable, quiet, and powerful saloons. The three-litre V6 in all but the latest models deservedly rated among the top 10 V6s in the world for more than a decade. These cars in the 1990s weighed around 1350kg or thereabouts. What’s a loaded float? Two tonnes or so?

I personally wouldn’t be comfortable, but I’m sure there are plenty of Horsetalk users out there who have done so. How does it feel? Do you feel you can stop adequately? One thing I would confidently advise is to fit a cooler to your auto transmission!

The Maxima was sold in Japan under the Cefiro badge. In New Zealand at least, a look at the second-hand market would point to more Cefiros being on the road than Maximas.

If towing is your intention, I’d recommend buying a Maxima sold new in Australasia. For one thing, the three-litre engine was the only option, whereas in Japan the commonest size was 2.5-litre. They also sold plenty of 2-litre variants. The 3-litre was absolute top-shelf and were not nearly as common. The 3-litre Japanese Cefiros were actually more powerful – another 30 horsepower, to be precise. However, this is achieved through a MEVI, a variable intake device which allows the Cefiro engine to breathe better as it approaches redline. The downside of a MEVI is that it “steals” this top-end power from the mid-range, which is exactly where you need it to tow. Stick with a Maxima.

I saw a 2.2-litre Camry towing a double horsefloat the day I wrote this report, so there are definitely people out there doing it. Do they pull it OK? Wouldn’t the earlier 3-litre versions be better? The Camry is a good, reliable, and very comfortable saloon.

I’m not sure I’d be all that comfortable with a float behind one, however. Like the Maxima, you would be wise to have a transmission cooler fitted to the gearbox. Better safe than sorry.

The diesels had something of a reputation in their earlier years for blowing their goolies. Are they better now? Not as big as the Landcruiser or a Gran Road, but I imagine they’d do a good workman-like job of hauling a float. What do readers think?

I’ve driven them but never towed a float with one. Anything to watch? I’ve seen some of those Space Gear four-wheel-drives towing floats. How do they go? I understand they’re built on a Pajero platform.

These always struck me as pretty well priced against the bigger Nissan and Toyota four-wheel-drives. Was there a reason for this? If they proved to be good towing vehicles and reliable to run, they’d have to be a good choice for those needing some decent towing power on a budget. What are your views?

There you go. There are probably some damned fine towing vehicles in Australasia that I haven’t even thought of. Anybody pulled a float with a Humvee?

Feel free to take my opinion with a grain of salt and offer up your own. Let’s face it, if we all thought the same way about cars and four-wheel-drives we’d all be driving the same thing!

First published on Horsetalk.co.nz in January, 2006

9 thoughts on “What’s the best second-hand vehicle for towing a horse trailer?”