Hyperkalemic Periodic Paralysis (HYPP) has been recognised in Quarter Horses since the 1980s. Dr Sharon J. Spier takes an in-depth look at the syndrome since genetic testing has been available to breeders.

A “syndrome” in related horses was first recognised in the 1980s by breeders and veterinarians; it was first reported to be similar to HYPP in humans by JH Cox at the annual American Association of Equine Practitioners convention in 1985.

In December 1992, this genetic disease was publicly linked to a popular Quarter Horse sire named Impressive.

This prolific sire, born in 1969, has 355,000 descendants registered with the American Quarter Horse Association (AQHA), and these offspring dominate the halter horse industry. Current estimates indicate that 4% of the Quarter Horse breed may be affected.

Unfortunately, the gene frequency has not decreased in the past 14 years since genetic testing has been available to breeders, and controversy continues among horse breeders whose stock carry this gene.

Affected horses seem to have been preferentially selected as breeding stock because of their pronounced muscle development, and there is evidence of selection of HYPP-affected horses as superior halter horses by show judges.

In 1996, AQHA officially recognized HYPP as a genetic defect or undesirable trait. To increase public awareness of this genetic defect, mandatory testing for HYPP with results designated on the Registration Certificate began for foals descending from Impressive born after January 1, 1998. In response to requests from the membership, the AQHA Stud Book and Registration Committee ruled in 2004 that foals born in 2007 or later that test homozygous affected for HYPP (H/H) will not be eligible for registration. Breeders opposed to restrictions argue that the disease can be controlled through diet and medication and that these horses are highly successful in the show ring.

Clinical signs among horses carrying the same mutation range from asymptomatic to daily muscle fasciculations and weakness. In the majority of horses, intermittent clinical signs begin by two to three years of age with no apparent abnormalities between episodes.

Myopathies can be broadly divided into several categories.

The first involves damage to the muscle itself, called rhabdomyolysis, which typically results in clinical signs seen in tying up. The horse manifests clinical signs of exercise intolerance, muscle stiffness, or painful muscle cramps.

The second category includes disorders resulting from changes in the conductivity of muscle membranes that lead to myotonia or sustained muscle contraction. Clinical signs are muscle fasciculations or trembling. One example is hyperkalemic periodic paralysis (HYPP) caused by a defect in the skeletal muscle-sodium channel.

Other reported disorders with suspected membrane defects in horses include myotonic dystrophy and congenital myotonia.

In humans, over a dozen such disorders have been described that have some striking
clinical similarities leading to the coining of the terms ion-channel diseases or ion channelopathies. Many muscle-membrane channel defects (so-called “channelopathies”) have been characterized, and the molecular basis for disease is well described.

A third category of myopathies includes those associated with atrophy and weakness, such as neurogenic causes like equine motor neuron disease and botulism and myogenic causes like disuse, immunemediated causes, or causes associated with Cushing’s disease. Glycogen-branching enzyme deficiency, recently described in Quarter Horse foals, causes severe muscle weakness because of the foal’s inability to store glycogen.

Fasting, anesthesia or heavy sedation, trailer rides, and stress may also precipitate clinical signs; however, the onset of signs is often unpredictable without a definable cause.

Other possible precipitating factors that have been noted in humans and horses are exposure to cold, fasting, pregnancy, and concurrent disease and rest after exercise. Exercise does not seem to stimulate clinical signs, and serum CK shows no change to very modest increases during episodic fasciculations and weakness.

In most cases, clinical episodes begin with a brief period of myotonia with some horses showing prolapse of the third eyelid. Sweating and muscular fasciculations are observed commonly in the flanks, neck, and shoulders. The muscle fasciculations become more generalized when additional muscle groups are involved.

Stimulation and attempts to move may exacerbate muscular tremors. Some horses may develop severe muscle cramping. Muscular weakness during episodes is a common characteristic of HYPP. Horses remain standing during mild attacks. In more severe attacks, clinical signs may progress to apparent weakness with swaying, staggering, dog sitting, or recumbency within a few minutes. Heart and respiratory rates may be elevated, and horses may show manifestations of stress (anxious appearance), yet remain relatively bright and alert during episodes. Affected horses usually respond to noise and painful stimuli during clinical manifestations of the disorder. Episodes last for variable periods, usually from 15 to 60 min.

HYPP results from a point mutation that causes a phenylalanine/leucine substitution in a key part of the voltage-dependent skeletal muscle sodium channel alpha subunit.

In horses with HYPP, the resting membrane potential is closer to firing than in normal horses.

Sodium channels are normally briefly activated during the initial phase of the muscle-action potential. The HYPP mutation results in a failure of a subpopulation of sodium channels to inactivate when serum-potassium concentrations are increased. As a result, an excessive inward flux of sodium and outward flux of potassium ensues, resulting in persistent depolarization of muscle cells and temporary weakness.

Descent from the stallion Impressive on the sire’s or dam’s side in a horse with episodic muscle tremors, weakness, or collapse is strongly suggestive of HYPP.

Quarter Horse foals born after 1998 that are offspring of an affected parent have a statement recommending DNA testing for HYPP on the Certificate of Registration. In most cases, hyperkalemia (6-9 mEq/l), hemoconcentration, and mild hyponatremia occur during clinical manifestations of the disease with normal acid-base balance.

Because veterinarians may not be present during acute episodes, the definitive test for identifying HYPP is the demonstration of the base-pair sequence substitution in the abnormal segment of the DNA encoding for the alpha subunit of the sodium channel.

Submission of mane or tail hair should be made to a licensed laboratory such as the Veterinary Genetics Laboratory at the University of California at Davis.

If horses are just beginning to exhibit clinical signs, light exercise can sometimes abort an episode in mild cases. Feeding grain or corn syrup to stimulate insulin-mediated movement of potassium across cell membranes may also be helpful.

Other treatment options that may abort an episode include administration of epinephrine (3ml of 1:1000/500 kg, IM) and administration of acetazolamide (3 mg/kg every 8-12 h, orally). Many horses experience spontaneous recovery from episodes of paralysis and appear normal by the time a veterinarian arrives.

In severe cases, administration of calcium gluconate (0.2- 0.4 ml/kg of a 23% solution diluted in 1 litre of 5% dextrose) will often provide immediate improvement.

To reduce the serum potassium, IV dextrose (6 ml/kg of a 5% solution) alone or combined with sodium bicarbonate (1-2 mEq/kg) can be used to enhance intracellular movement of potassium.

With severe respiratory obstruction, a tracheostomy may be necessary.

Optimally, later cuts of Timothy or Bermuda grass hay, grains such as oats, corn, wheat, and barley, and beet pulp should be fed in small meals several times a day.

Regular exercise and/or frequent access to a large paddock or yard are also beneficial. Pasture works well for horses with HYPP, because the high water content of pasture grass makes it unlikely that horses will consume large amounts of potassium in a short period of time. 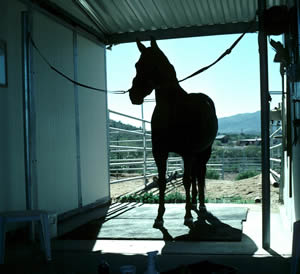 Ideally, horses with recurrent episodes of HYPP should be fed a balanced diet containing between 0.6% and 1.1-1.5% total potassium concentration and meals containing .33 g of potassium.

Many horses may be asymptomatic on diets containing higher concentrations of potassium. It was shown that horses adapted to diets higher in potassium over a period of two weeks and experienced fewer fluctuations in potassium in blood with subsequent decreased frequency of clinical signs.

Table 1 contains examples of feeds containing varying concentrations of potassium. Vitamin E, selenium, salt, and balanced minerals should be supplemented where indicated to meet nutritional requirements. Commercially available complete feeds with a guaranteed K. content may be more convenient for some HYPP horses, especially for owners with few horses.

For horses with recurrent episodes of muscle fasciculations, even after dietary alterations, acetazolamide (2-3 mg/kg every 8-12 h, orally) or hydrochlorothiazide (0.5-1 mg/kg every 12 h, orally) may be helpful. These agents exert their effects through different mechanisms; however, both cause increased renal potassium excretion. In addition, acetazolamide stabilizes blood glucose and potassium by stimulating insulin secretion. Breed registries and other associations may have restrictions on the use of these drugs during competitions, because diuretics may mask prohibited substances.

In most cases, HYPP is a manageable disorder; however, recurrent bouts may occur, and severe episodes can be fatal. Owners of affected horses should be strongly discouraged from breeding these animals for the long-term health of the Quarter Horse breed and other breeds. Because this is a dominant trait, breeding an affected horse to a normal horse results in a 50% chance of producing a foal with HYPP.

All affected horses share the same mutation, regardless of whether or not owners have witnessed symptoms in their horses.

Affected horses are not suitable for young or inexperienced riders. Owners of affected horses should advise veterinarians of HYPP status before anesthesia or procedures requiring heavy sedation.

© Sharon J. Spier, DVM, PhD, Diplomate ACVIM
This article may not be reproduced in any form without prior permission

First published on Horsetalk.co.nz in March, 2007