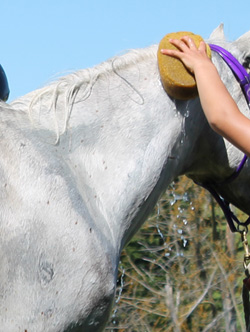 Four of the five French veterinarians who sparked a social media storm over their letter describing events at the CEI *** endurance event at Compiegne are calling for more transparency from the FEI following the limited release of information over the death of a horse at the event.

An English translation of an open letter from Agnès Benamou-Smith, Christophe Pelissier, Pierre Romantzoff and Antoine Seguin has been released, centring on the death of Elmerita di Gallura at the May event.

The vets are unhappy about the amount of information released on the mare’s death.

Correspondence from FEI corporate communications, forwarded by Benamou-Smith, apologised for the delay in its response, saying the results of the necropsy, required under FEI Veterinary Regulations, and the final results of testing on samples taken at the venue had to be passed firstly to the owners of the horse and other official parties.

“The detailed reports of equine post mortems are confidential and are disclosed only to the owner or owners of a horse,” the FEI said.

“At the conclusion of testing, the laboratory has reported that no prohibited substances were found.

“The extensive post-mortem examination, which also included microscopic analysis by the investigating pathology experts at an independent and internationally recognised pathology facility of the French Ministry of Agriculture, found no conclusive evidence of the possible cause of death.

“The required investigations have now been completed, but unfortunately despite extensive efforts have not revealed the cause of this very sad incident,” the FEI said.

The vets, in their latest letter, characterised the FEI’s response as “results from the anti-doping test are negative and the post-mortem examination did not explain the cause of death”.

“Hence, it would seem that the case is closed,” Benamou-Smith and her colleagues wrote.

“As well informed as we are, we cannot accept a two-line summary by the FEI Veterinary Department, stating that the autopsy and the anti-doping results contain no significant elements that permit to establish cause of death.

“We cannot accept either that the FEI, whose self-professed mission is to lead an enquiry into the death of a competing horse, produces such a statement.”

It said, for the sake of “real transparency”, which they described as the key factor in clean sport, the complete scientific results of the tests should be published.

They have been known to the FEI since June, the vets said.

“We are still waiting for the FEI to publish the results of other samples sent by us to the French medication control laboratory LCH.”

They continued: “It is urgent and of utmost necessity that the FEI provides professionals in charge of veterinary care as well as members of the jury the means to bring light to these events by seeking and publishing clear and thorough results.

“Only then will conditions of a real ‘transparency’ be fulfilled.

“Although the intention expressed by the FEI to fight doping has never seemed stronger, we still have the feeling that actions are not yet sufficient to attain the declared objectives.”

One thought on “Compiegne vets call for more transparency from FEI”