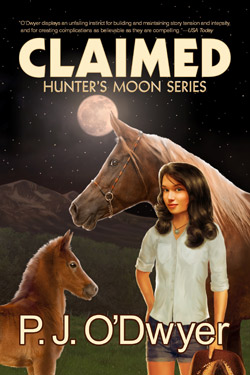 Fourteen-year-old Colorado juvenile delinquent Mackenzie Lynn Stonebreaker doesn’t do horses. But the volunteer gig at Hunter’s Moon Ranch has its perks. With cold, hard cash she lifts from its boarding fund, Mac’s poised for escape to search for her birth mom when an Arabian mare named Bella is viciously struck by a shotgun blast. Alive and talking — well, telepathically only to Mac — the horse begs for her help.

Talking to horses totally freaks Mac out. But leaving Bella and her colt Raider isn’t an option. Ditching her plans for now, Mac becomes a modern-day Dr Doolittle, looking for justice. Only Mac tends to act first and ask questions later. When her protective instinct for the horses gets in the way of her good sense, Mac finds herself, once again, on the other side of the law.

Dodging a return trip to juvie, thanks to the ranch owner’s partner Dr Rachel Hunter, Mac is now in the pediatrician’s custody and living a life she could only dream. With newfound friendships, the gift of gab with two quirky horses, her first kiss, and a chance at that family she’s always wanted, she can’t quite let go of one thing.

Abandoned and unloved by her mother, Mac wants to know why. But sleuthing for answers puts Mac on a collision course with the past — one that will shatter everything she believes in about herself and those she’s come to love and trust at Hunter’s Moon.

Mac just may find that what she’s been looking for her whole life is the exact opposite of what she will get.

She entered her room where a set of metal bunk beds were smashed up on either side of the wall. Empty. Her shoulders relaxed. She crawled into the bottom bunk and dug her hand down the side of the bed against the wall for a familiar soft paw, then tugged.ac refused to blink. The tears welling up in her eyes had better take a hike.

The bear brought back memories of the mare. Brown in color, with a few holes—although the bear’s were from age—he brought her comfort. She’d had him since she could remember and, over the years, had rubbed his right ear down to the bare thread. She could just make out the small, brass bell inside. She’d learned at a young age not to draw attention to the bear and kept him hidden, the bell quiet.

She turned him over, pulled the cash from her back jean pocket, and shoved it between his butt cheeks where the stitching had popped. The not-so-big bankroll fit perfectly. That was fine. She would add to it as best she could until the time came to make her break. She squeezed him tight and put him back. Reaching under the other side of the mattress, facing the door, she hesitated.

The voices remained muffled and still on the main level of the house.

Mac pulled out a folded sheet of paper and opened it. She studied the names—Bennett and Adele Stonebreaker—but specifically the address.

Her little visit to the superintendent’s office that day had paid off and big. What was in a name? A lot if you were looking for your birth mother.Mac fell back against her pillow. Even if she had made it to the river and escaped, she’d forgotten one thing.The little she did cherish, like Mr. Bear or this document she needed to find her mom, was still here at Rifle House.

She jumped and shoved the paper under her blanket.

Caroline entered the room, Mac’s mattress giving a little when Caroline sat down. “You hungry?”

“You sure about that?” Caroline brought her hand out from behind her back and held out a fat blueberry muffin.

The baked goodie taunted Mac, and she grudgingly took it from Caroline. “Thanks.”

Caroline crossed her legs Indian style at the end of her bunk. Mac scooted closer to the top and leaned against the metal bars that made up the headboard.

She could pretend she didn’t know what Caroline was talking about. But she’d seen their—Mac and Jordan’s—hasty business transaction outside the barn earlier today. Mac took a deep breath through her nose. Either she started trusting someone or the stupid mare and her colt she kind of cared about could end up separated. The way Whit told it before she left tonight, Bella could end up going to some kind of auction.

“I need to get back to Hunter’s Moon.”

“Aren’t you on the schedule for Monday after school?”

Caroline’s brows crinkled. “For what?”

“Did you hear the gunshot today?”

“Someone shot the Arabian.”

“No. But totally messed up. She’s shot up like a target and had part of a tree stuck in her jaw until Doc Travers removed it today.”

“It’s a long story. She’s shot up pretty bad. Hide and face full of BBs and stitched up like a busted piñata.”

“Yeah. For now. But what if Bella’s owners want to take her and send her to auction.”

Mac stiffened. “You know what that is?”

Caroline shook her head yes. “They ship them down to Mexico and cut their heads off.”

Panic rose like being caught in an unexpected undertow, and Mac struggled to stay afloat, only to have it drag her under. “I’ll steal them both before that happens.”

About the author: Born in Washington, D.C., and the oldest of five children, P.J. O’Dwyer was labeled the storyteller of the family and often accused of embellishing the truth. Her excuse? It made for a more interesting story. The proof was the laughter she received following her version of events.After graduating high school in the suburbs of Maryland, the faint urgings of her imaginative voice that said “you should write” were ignored. She opted to travel the world instead. Landing a job in the affluent business district of Bethesda, Maryland, as a travel counselor, she traveled frequently to such places as Hawaii, Bahamas, Paris, New Orleans, the Alaskan Inland Passsage, and the Caribbean Islands.Today, P.J. lives in western Howard County, Maryland, with her husband Mark, teenage daughter Katie, and their cat Scoot and German Shepherd FeFe in a farmhouse they built in 1998. P.J.’s learning it takes a village to create a writer and relieved to know she’s not in this alone. She’s an active member of Romance Writers of America. Also participates in a critique group, which has been an invaluable experience with many friendships made and an abundance of helpful praise, and, yes, criticism. But it’s all good. Improving her craft is an ongoing process. Writing is a passion that runs a close second to her family. When she’s not writing, she enjoys spending time with family and friends, fits in her daily run with her husband Mark, and tries heroically to keep up with her daughter Katie’s social life. Who knew how demanding the life of a teenager could be, especially for Mom?When asked where she gets her ideas for her stories, she laughs ruefully and says, “It helps being married to a cop.” Actually, she admits, “Every day I find a wealth of possible stories and plots in the most unsuspecting place – my daily life.”