A British scientist has called on the scientific community to make a change in mind-set and phase out animal testing.

Speaking in response to today’s Home Office announcement that there had been no decrease overall in the number of animal procedures conducted in 2013, Dr Brett Cochrane, Group Head of Science at the Dr Hadwen Trust, said the news was “disappointing but not surprising”.

“Using animals in biomedical research continues because there is often a lack of vision, politically and scientifically, to put human relevancy first,” he said.

“Despite the marginal increase in the overall number of procedures, there is some encouraging news. An area of animal use, of high importance to the DHT, is that of fundamental biological research and the latest statistics reveal there has been a significant decrease of 11% in the number of procedures performed, however, there is still much work to be done,” he said.

The Dr Hadwen Trust is  the UK’s leading charity dedicated to funding non-animal biomedical research. It is a field in which Dr Cochrane believes the country could be a world leader.

“The UK has a reputation for excellence in scientific research. We have an opportunity to lead the world in non-animal medical research. It is time to do things differently and for a change in mind-set. The DHT is proud that through our research projects, we have demonstrated that real progress can be made in understanding devastating human diseases without experimenting on animals.”

Dr Cochrane added: “There should be increased government funding in this area. Additionally, some of the large medical charities could show adventurous leadership and earmark a greater percentage of funds each year for non-animal research.

“We recognise that developing alternative methods will be more challenging in some areas of research than in others. This is not something that the DHT, nor indeed any single organisation, can achieve on its own. It is time to work together. It is time for the government to take the lead. It is time to define and implement a plan to phase out the reliance on animals.” 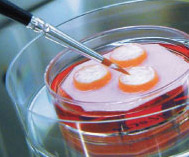 He concluded: “We urge those concerned by the Home Office statistics to think seriously about supporting the work of the DHT. With a collaborative approach, this time next year we should be discussing progress, not statistics.”

The Dr Hadwen Trust (DHT) is the UK’s leading non-animal medical research charity. Over the last five years alone the DHT has funded more than £2.25 million of animal replacement research projects across the UK at student, PhD and post-doctoral level. To date, the Dr Hadwen Trust continues to be the UK’s leading charity provider of grants solely dedicated to animal replacement medical research.

Summary by the Dr Hadwen Trust of the 2013 Home Office report, Annual Statistics of Scientific Procedures on Living Animals – 2013 (PDF)

One thought on “Call for animal testing to be phased out”