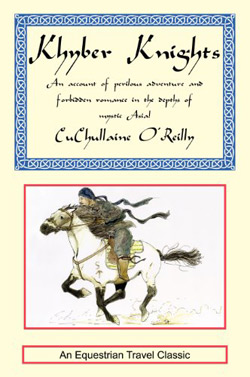 Khyber Knights is a page-turning account of an epic and at times harrowing adventure.

It would be a mistake to assume that a tale from the frontiers of northwest Pakistan from 30-odd years ago has lost its relevance today.

Far from it. CuChullaine O’Reilly’s account of life on the frontier provides an arguably unique insight into this remote portion of the world that has never been far from the headlines since he penned the book.

Indeed, for centuries little has changed in some parts of this remote tribal region.

He recounts for readers his long horseback journey across this remote portion of Pakistan right up to the frontier mountains of Afghanistan.

Khyber Knights is described by O’Reilly as a fictional account based on a chronological sequence of actual events. I must confess to some doubts about this approach as I opened the book to the first chapter, but any misgivings were soon well behind me.

The painting that O’Reilly provides of life in this region is rich, colourful and textured.

Indeed, I very much doubt anyone from the West will be able to safely undertake such an awe-inspiring expedition in this region for at least another generation, perhaps longer.

O’Reilly presents a tale of excitement, sorrow, love, danger, adventure and intrigue, as well as a graphic and distressing account of his time wrongly incarcerated in the notorious Rawalpindi Prison.

The scale of the adventure is mindblowing. O’Reilly and his travelling companions witnessed abject poverty, aggression and unspeakable cruelty as they moved through the plains, valleys and mountains along their route. At other times, they were the grateful recipients of great warmth and hospitality from people who in many cases were prepared to share even their own meagre food rations with them.

Their journey begins from the bustling city of Peshawar. As O’Reilly puts it: “The route I proposed would take us and our horses in an 1100 mile circle north from Peshawar. Lying in between were four of the largest mountain ranges in the world, including the Karakorams and the Himalayas. There was an odd desert or two, at least ten rivers, pockets of vicious sectarian violence, and more than a dozen different languages. It sounded perfect.”

As the journey unfolds, we learn much about the cultures and tribal life of the frontier’s inhabitants. Life may be simple for many in this part of the world, but the complexities of the culture, the legacies of a violent history and the sheer fortitude needed to survive provide virtually every page with some new twist.

To describe the book as well written would be an injustice to O’Reilly. It is wonderfully crafted and flawlessly executed.

Having known O’Reilly for the best part of 10 years — and only having now read the 658-page volume he quaintly refers to as his “little book” — one has to admire the spirit by which anyone could even conceive of such an adventure, let alone execute it.

CuChullaine O’Reilly is an investigative reporter who has spent more than 30 years studying equestrian travel techniques on every continent. After having made lengthy trips by horseback across Pakistan, he was made a Fellow of the Royal Geographical Society and the Explorers’ Club.

O’Reilly founded the Long Riders’ Guild, the world’s first international association of equestrian explorers. The organization has members in 42 countries, all of whom have made a qualifying equestrian journey of at least 1000 miles. The Guild has supported more than a hundred equestrian expeditions on every continent except Antarctica.