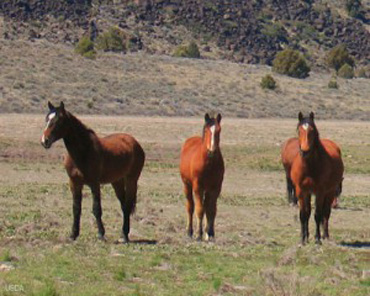 An American study has cast a spotlight on the effects of culling and a long-acting contraceptive on the behavior of wild horses.

The researchers found that the social behaviors between treated and control female horses, who were given saline, were similar.

However, they noted marked changes in the social behavior of harem stallions, but the evidence suggested this was due to the population culling and not the contraceptive.

The researchers followed wild horses in Theodore Roosevelt National Park, North Dakota, for a year before and a year following non-lethal culling and treatment of some of the mares with a Gonadotropin-releasing hormone (GnRH), marketed as GonaCon-B.

GonaCon-B has been shown to provide multiple years of infertility in several wild ungulate species, including horses.

The researchers, Jason Ransom, Jenny Powers, Heidi Garbe, Michael Oehler Sr, Terry Nett, and Dan Baker, observed the horses in the study during the breeding season and found only minimal differences in time-budget behaviors between free-ranging female feral horses treated with the contraceptive and those treated with the saline.

What differences they did see were consistent with the metabolic demands of pregnancy and lactation, said the researchers, whose findings have been published in the journal, Applied Animal Behaviour Science.

There was no difference between the mean body condition of control females and treated females.

Band fidelity among all females increased 25.7 percent in the year after vaccination and culling, despite the social disturbance associated with the cull.

The amount of available forage influenced harem-tending, reproductive, and agonistic behavior in the year following culling and treatment.

The horses used in the study were in the southern area of Theodore Roosevelt National Park, and were confined by a high woven wire boundary fence.

All horses in the area had previously been identified and assigned individual identity numbers by park managers. Age and reproductive data for each had been maintained since 1993.

In spring and summer 2009, when all the pre-treatment information was collected, 165 horses occupied the park across 19 bands. All bands contained a single adult stallion and adult females and their offspring, with the exception of one band that had a second stallion. No females lived outside of bands, whereas bachelor males were distributed across the landscape individually or sometimes in small groups.

The horses were gathered into permanent corrals in October 2009, with 78 removed to meet the park agency’s management needs.

The researchers selected 58 adult females, aged 2 to 17, with 29 getting the contraceptive and 28 getting the saline. One mare could not be captured. The females of both treatment groups were dispersed randomly across 16 bands.

Veterinarians blinded to treatment status assessed the general health, pregnancy, and body condition of each animal at the time of capture.

The horses were observed again and data gathered during the following year in three time windows. In all, behavioral information was collected on 93 wild horses – 23 males, 29 pre-treatment females, 27 pre-control females, plus 14 other females during 2009.

There were no differences in behaviors between pre-treatment and pre-control females, the scientists said, but some differences were noted  in the year after inoculation.

“Treated females fed more and moved more than control females, and reciprocated by reducing time in resting and maintenance behaviors. There were no changes in time spent engaging in social behaviors between treated or control females …”

The changes in behavior of stallions toward mares were more pronounced.

“Stallions herded all females less and harem-tended more following the changes in population density, demography, and social perturbation that resulted from culling.”

“None of the models indicated that herding or harem-tending varied due to the treatment status of females, but rather implied that the paradigm shift in competition influenced how band stallions managed their family groups,” they wrote.

There was strong evidence these changes were related to the effects of culling, they said.

2 thoughts on “Culling had bigger effect on wild horses than contraceptive, say researchers”