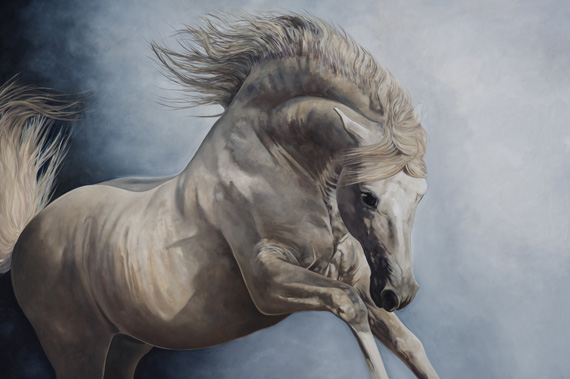 Tony O’Connor grew up in a family of blacksmiths and says horses are in his blood. Marianne van Pelt talks to the equine artist with a growing international reputation, as a major exhibition of his works prepares to open.

Irish equine painter Tony O’Connor is something of a dark horse. In a limp art market in a historic recession, he has come out of nowhere to have sell-out solo shows in Cork, almost 90,000 followers on Facebook and an avidly anticipated new solo show, Stags and Stallions, which opens on Thursday and runs until June 26 at the Doorway Gallery in Dublin.

In fact, O’Connor’s highly realistic paintings of gleaming horses gazing thoughtfully at the viewer are in such demand he can’t keep pace. 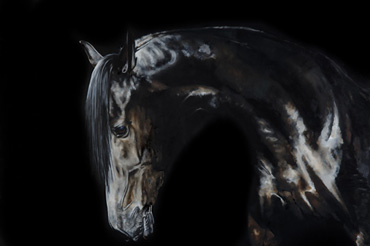 “The build-up for this show was difficult,” he explains, sitting on a beat-up leather couch in his grey industrial studio surrounded by light and dark canvases in various states of completion.

“People kept coming here to buy the paintings I’d done for the show. Even the prep drawings flew out the door. So many things pre-sold. It’s a problem.” He smiles. “A good problem. I never forget how lucky I am to work at something I love. People ask me what I’d do if I won the lottery – I’d buy more paint.”

Indeed, O’Connor is covered in paint – paint on his loose jeans, paint on his big pale hands, paint on the soft knit hat he wore. But just a few years ago it didn’t look like O’Connor would ever paint again. Although he graduated from Crawford College of Art in 2002, he dropped out of the art scene a year later and took a job as a sales clerk at Carey’s Tools in Cork.

“I was living next door to the shop. I didn’t know what to do. I told them – this is only temporary – I’ll be here six months.”

Nine years later he was still there.

“The Careys are a great family, and we’re close. But I didn’t really do any painting during those years. I drew the Carey Tools Christmas cards for them, and I drew a bit for my own sanity. But I didn’t paint.”

Then fate intervened. He entered the “Key to a New You” competition on Red FM. First prize was several sessions of personal training and a couple of sessions with a Life Coach. Tony won. He was delighted with the personal training sessions – he’s dedicated to his workouts – but thought the Life Coach stuff was something for “hippy dippies”, as he says. Still, he agreed to one session. He came away a changed man.

“The coach asked me, ‘What’s stopping you from doing what you love?’ I said – there’s not enough time; I have children, a job. But he asked me what I did in the evenings. He challenged me. By the time I left his office an hour later, I had a plan for a solo exhibition by the end of the year. 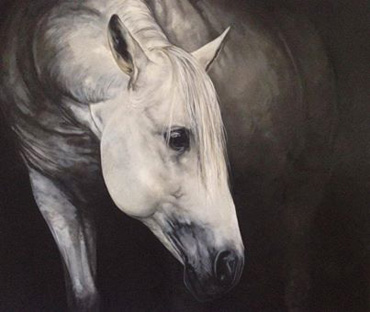 “I went back to the gallery where I’d had a group show as a student and asked them about a solo. They remembered my horses – from ten years before! They said,‘how many paintings do you have?’ I had one. I needed 20.”

The Carey family let him use an attic space as a studio. He painted whenever he could snatch a bit of time. “I was so tired and so happy,” he says, beaming at the memory of it.

That show sold out. So did the next one. So did all the paintings he took to the Royal Dublin Horse Show.

“I’ve done three years at the RDS,” he says.

“Some people who come to my stand tell me they fly over from the UK especially to buy my work.”

What explains his phenomenal success?

He looks shy. He tugs at his knit hat and shrugs. “I don’t know. People get very emotional about the paintings. One woman came into my stand in Dublin and looked all around at them and just burst out crying. She kept saying how sad the horses were.”

I know what she means. The horses seem to look at me as if they know me, equine Mona Lisas full of mystery. A grey with wide expressive ears drops its head; a bridled bay peers up from under a long forelock; a blue-black Friesian marches steadfastly toward me. Certainly, there’s something poignant about them. I ask him if his horses really are sad.

“I try to get the eye right,” he says. “The eye is the centre of the painting – it’s the window to the soul. But I think maybe a lot of horses are sad, in a way. They don’t have an easy life. They’re beasts of burden. That’s why I do things for charities like the Irish Horse Welfare Trust. I feel for the horses.”

O’Connor’s horses may be sad, but they’re also beautiful: shining vital creatures full of movement. The canvases are simple and dark, and the strong, precise, muscular forms of the horses’ bodies catch the light, emerging like a sign of hope.

Why does he paint horses?

O’Connor looks at me with his own large, gentle eyes. “When I’ve painted, I’ve always painted horses. I grew up in a family of blacksmiths so I guess they’re in my blood. I’ve done other things, but I always come back to them. If I never sold another painting for the rest of my life I’d still paint horses.”

Somehow, that seems unlikely to happen. 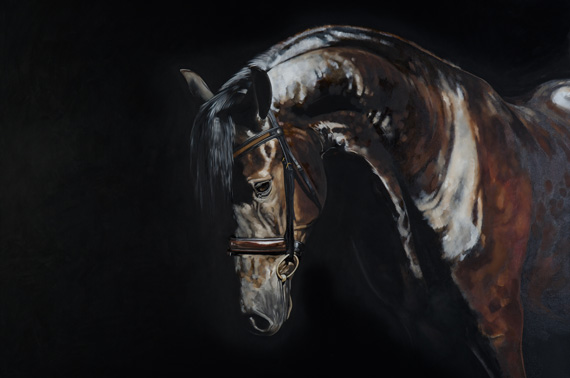 Marianne van Pelt is a journalist living in Ireland, where she rides and competes show jumpers.

Marianne van Pelt is a journalist living in Ireland, where she rides and competes show jumpers.