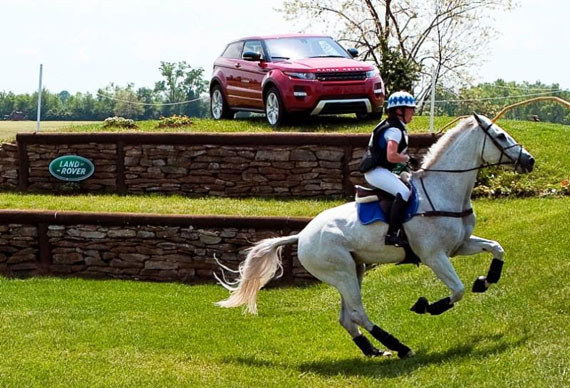 Land Rover North America is back as presenting sponsor of the USA’s only four-star horse trials, the Rolex Kentucky Three-Day Event.

They are among record entries this year, with 82 horses down to start at the Kentucky Horse Park in Lexington from April 24 to 27. The world’s best horses and riders vying for their share of $250,000 in prize money as well as a shot at the $350,000 Rolex Grand Slam of Eventing.

As part of its sponsorship, Land Rover will also be title sponsor of the “Land Rover Tailgate” and presenting sponsor of the NBC telecast of the event. It will also renew the “Land Rover Best Ride of the Day” program initiated last year that honors the top US rider who comes closest to the optimum time on the cross country course with no jumping penalties. The winner is awarded a 24-month lease of a 2014 Range Rover Evoque.

Darren Ripley, president of Equestrian Events, Inc. (EEI), producer of the Rolex Kentucky Three-Day Event, said two of the most popular attractions at our event in recent years have been the Land Rover Tailgate and Land Rover’s off-road test drive area. “Their involvement has greatly enhanced our event and we thank them for their continued support.”

For the fourth consecutive year the event will offer tailgating on the grounds of the Kentucky Horse Park for attendees to the equestrian competition. Land Rover will host its third annual “Land Rover Tailgate Challenge” on Saturday, April 26, and will award an extensive prize package to the most creative, best-decorated and best-catered Land Rover tailgate party.

Throughout the weekend, guests of the event will have the opportunity to drive a 2014 Range Rover, Range Rover Sport, Range Rover Evoque and the Land Rover LR4 on a specially designed off-road demonstration course with a trained and experienced driving instructor as co-pilot.  The all-new Range Rover Sport will be available for driving demonstrations this year having debuted in the spring of 2013 and was only available for display at last year’s event. New for this year’s event, the recently debuted 2014 Range Rover Long-Wheelbase Autobiography Black will also be on display.