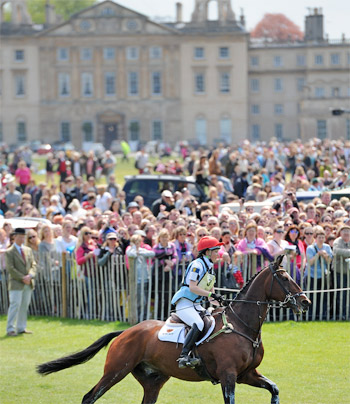 Kiwi riders will be going all out for the selectors at this year’s Badminton Horse Trials, with seven New Zealanders in the starting field, and 12 horses accepted.

A major focus at Badminton this year is selection for the FEI Alltech World Equestrian Games in Normandy this summer.

Competitors from 14 other nations will take on the best of the British at the event, from May 7 to 11.

Each rider can start a maximum of two horses in the competition, and Andrew Nicholson and Mark Todd both have a choice of three horses.

Australia also has a strong contingent, as does Ireland, with 10 horses, and 8 each from France and the USA and 7 from Sweden.

Cross-country has returned to the Saturday, and the event also has a new designer in Giuseppe della Chiesa, appointed by the Duke of Beaufort and Event director Hugh Thomas after last year’s record breaking Trials.

The prize money has had a considerable boost, with the winner receiving £80,000, up from £65,000 in 2013, and the increases are also reflected in the lower placings, right down to 20th place.

Among those not to have won here Andrew Nicholson stands out with his record 33 completions to date and he must stand a great chance this time with a choice of two from Nereo (3rd in 2013), Quimbo (Kentucky winner 2013) and Avebury (1st and 2nd at Burghley).

British favourite Mary King will ride Imperial Cavalier, who has completed on four occasions and has been 3rd and 4th in the past; William Fox-Pitt has a choice of four, including European bronze medalist Chilli Morning.

Places in the British team are certainly up for grabs after the disappointing result at the European Championships last year, so competition for the record prize money and the best known Trophy in the world will be intense.

Over 130 entries were received for the 85 places available, so those on the ‘Waiting List’ will be hoping that some of those accepted withdraw over the next month.

Those on the wait list include New Zealand’s Megan Heath and St Daniel, who is eighth down the pecking order, with compatriot Neil Spratt and Upleadon 16th.