“In equitation as in politics, we should beware of oversimplifications; this nearly always complicates matters in the end.”  (General Decarpentry, 1949) 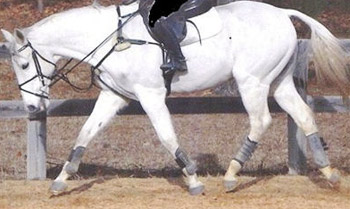 Decarpentry reflected on the discrepancy between the simplicity of riding principles and the complexity of putting them into practice. In theory, the horse engages the hind legs under his body, propelling himself upward and forward.

In reality, the forelegs produce the greatest percentage of upward vertical forces; 57% of the vertical impulse is produced by the forelegs while only 43% is produced by the hind legs. This apparent contradiction exposes the over simplicity of fundamental riding principles. Between the engagement of the hind legs and the mastery of balance, a complex mechanism is involved including converting a percentage of the thrust generated by the hind legs into vertical forces. This is done through sophisticated coordination of the back muscles. This coordination can be clearly explained but is not simple.

Furthering knowledge through skill and experience used to be the task of great Masters. Decarpentry closely followed the evolution of scientific discoveries. Already in 1949, the classic author sensed that the work of the hind legs was not simply engaging forward under the body and propelling the horse into balance. Even if his words were not accurate, Decarpentry already sensed the concept of energy stored in long tendons and aponeurosis and used during the propulsion phase.

“The degree of elevation of the body during the moment of suspension will depend likewise on the vigor of the effort of the hind legs, and consequently on the amount of previous compressions of their joints.”

Classical training is not about repeating the words of classic authors. Instead, the role of a real teacher and trainer is furthering our ancestors’ ideas through the light of new knowledge. Most of the time, this is not the case and therefore, the rider is the one who has to look and think beyond tradition.

As for every kinematics study, we start with a “control” document used for comparison and reference. The “control” is the work of Eadweard Muybridge, “Animals in motion, 1899.” Muybridge pioneered the technique of the photographic series, and his work pictures average horses in motion. On this first series, the horse is at the trot. The picture series needs to be read from right to left. The two frames that interest us are the first and second frame of the upper line. The left hind leg is close from impact and then alights while the left foreleg moves out of the way into the swing phase.

The picture at right shows a horse working heavy on the forehand. The picture has been taken a fraction of a second after Muybridge’s first frame and before the second frame. What is clearly apparent is how the forelegs adapt to excessive load. Even on Muybridge’s first frame, which is taken a fraction of a second before this picture, the left foreleg is already off the ground. By contrast, the left forelegs of the horse worked long and low and therefore heavy on the forehand, remains loaded on the ground. The heel just starts its upward motion. More push will be exerted on the toe before the hoof clears the ground. As a result, the left hind leg is not going to impact as much forward as Muybridge horse. As the left foreleg remains on the way, the adaptation of the left hind leg is, in this case, early impact.

This is not a case of over-tracking. The purpose of this series is simply showing that the forelegs adapt to excessive load by shifting the stance of the front limb backward. You can see the same adaptation during piaffe. Horses trained with a dressage whip activating the hind legs react by lifting the croup which shifts the weight over the forelegs. Many horses deal with the training error, shifting the forelegs backward underneath their body. The Germans criticized François Baucher, telling that his horses looked, during the piaffe, as a mountain goat on a mountain peak. Well, there are a lot of mountain goats on a mountain peak performing in the dressage ring.

Even if rewarded in the show ring, the forelegs’ adaptation to excessive weight is a kinematics abnormality resulting in deteriorating gaits, performances, and soundness. When the foreleg stance is shifted backward, the front limbs are unable to propel the horse body upward as they are designed to do. At the walk, the forelegs act as rigid struts over which the body vaults. At the trot, they are acting as springs propelling the body upward. When heavily loaded at the trot, the forelegs are acting as struts over which the body vaults. The trot is then flat showing little suspension or even no suspension at all.

The forelegs are not designed to function as struts at the trot. A great part of the propulsion as well as protraction results from an elastic strain energy that is stored in the long tendons and aponeurosis during the stance. Horses compensate the lack of elastic strain energy with greater muscular work but the abnormality induces aberrant kinematics and consequently injuries.

One who does not want to believe that long and low neck posture increases the load on the forelegs, may argue that the difference in the front limbs kinematics is due to the addition of the rider’s weight. Fortunately Muybridge also photographed horses with a rider. 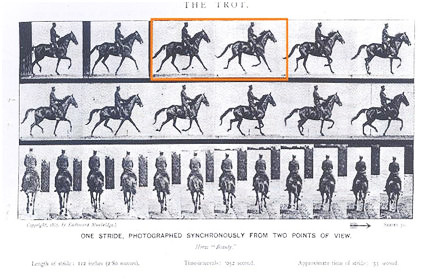 The two frames illustrating the same sequence or close from exactly the same instant, are surrounded by a yellow line.  A closer view clearly shows that the left front leg is even more advanced into the swing phase with the rider. This is not due to the rider, who in fact disturbs the horse locomotion having his bodyweight acting back to front. The horse could have reacted by shifting the weight on the forelegs. Instead, the horse’s reaction is more likely due to better athletic abilities. 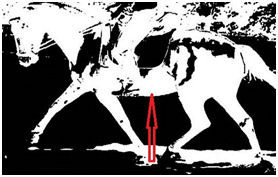 The kinematics abnormality shifting the whole stance phase of the front leg too far back can be created with a higher neck posture by driving the horse heavily on the bit and therefore increasing the load on the forelegs. This technique is based on the false belief that the hind legs propel the horse’s body upward as soon as there is ground contact. In reality, the alighting hind leg produces first a decelerating action.

When the propulsive activity commences, which is basically the second half of the stance, the hind leg is vertical under the croup and then moves behind the horse’s body. The force produced by the propulsive hind leg is therefore a force mostly horizontal. As the thrust generated by the hind legs travel through the thoracolumbar spine, it is submitted to gravity and, if not counteracted by the work of the back muscles, a percentage of the thrust generated by the hind legs loads the forelegs. The concept of driving the horse onto the bit is based on the bow and string concept. This concept is antiquated and inaccurate. L. J. Slijper (1946) compared the back as a bow and the abdominal muscles as a string. According to Slijper, shortening the string would flex the bow. 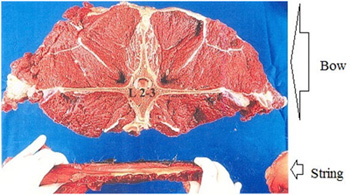 The picture at left illustrates the impracticality of the bow and string concept. Rectus abdominis muscles do not have the capacity of flexing the bow. They can assist the flexion but they don’t have the mass, the strength and the power to flex the mass of the back epaxial and hypaxial muscles. The main function of the rectus abdominis is stabilizing the GI track.

The muscles situated above the vertebrae (epaxial) are converting the thrust generated by the hind legs into horizontal forces, (forward movement,) as well as vertical forces, (resistance to gravity and therefore balance control.)

“An initial thrust on the column is translated into a series of predominantly vertical and horizontal forces which diminish progressively as they pass from one vertebra to the next”. (Richard Tucker-1964). 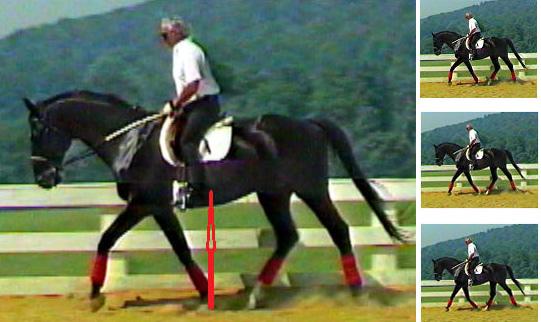 In the above picture, the horse clearly demonstrates the interaction between increased tension of the back muscles and limbs kinematics. On the way up the ring, the balance is OK for a warm up. The contact on the bit is relatively light. The horse jogs the trot quietly. The push off of the propulsive foreleg, which is the right foreleg on the picture, occurs under the vertical or slightly behind the vertical of the rider’s heels. The horse over-tracks as the right hind leg is going to impact slightly ahead of the right foreleg hoof print. The horse is at the trot. The small pictures show the impact of the right hind leg. This is a sample of normal limbs kinematics at the rising trot. 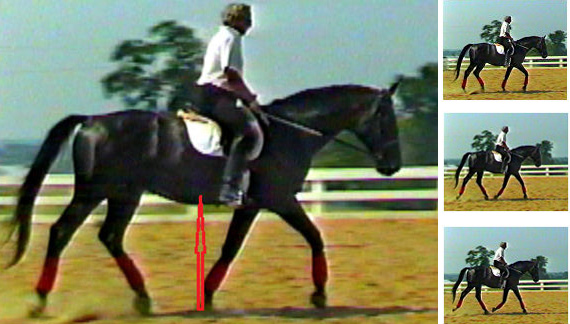 In the following turn, the horse contracts the back, pushing on the bit in front of him. After the turn and on the way down the ring, the same horse shows different front limbs kinematics. The horse is pushing on the bit and therefore is stiffening the thoracolumbar spine. Doing so, the horse is no longer capable of converting the thrust generated by the hind legs into vertical forces. Consequently greater forces are loading the forelegs, and the front limbs adapt to increased weight shifting the whole stance further back. There is no more than 50 steps between these two pictures series but one can clearly see the horse starting to push on the bit and stiffening the back muscles. Almost immediately, the push off of the propulsive foreleg occur further back under the horse’s belly. The small picture series shows that the horse still over tracks but because the foreleg pushes off too far back instead of the hind leg engaging more forward.

The horse pushes on the bit, contracting the upper neck muscle named the splenius, and consequently the back muscles are no longer capable to convert the thrust generated by the hind legs into vertical forces. As a result, more weight is loading on the forelegs and the front limbs adapt to the load, shifting the whole stance backward. Considering that a horse thinks in the moment, the adaptation makes sense from the horse’s perspective, but creates aberrant kinematics which aggravates the imbalance issue hampering the forelegs’ abilities of propelling the horse’s body upward.

Looking at the hoof placement does not provide accurate information. Limbs kinematics originates from vertebral column movement and focusing on lower legs instead of sound coordination between limbs and thoracolumbar spine creates dysfunctional horses.

One thought on “Overstepping the mark: the mystery of engagement”