Wolgram received the award – presented to the high point horse in the nation – on behalf of Ice at the NATRC’s National Convention in Oklahoma City, Oklahoma, late last month.

“Sometimes I believe I should have nicknamed him Fire instead of Ice,” Wolgram said on accepting the award.

“Because even though he has matured a lot in the past two years, he still wants to pass every horse on the trail. He has a very competitive attitude. He never quits. It is like he has fire coursing through his veins! Yet he is cool as ice as he has become confident, secure and attentive to me.”

Ken’s wife, Betty, often trailered Ice and her horse to distant rides so Ken could work through the week and then join them at the rides on the weekends. As a result, Wolgram blazed a path to the convention podium seven more times for first places in overall horse, horsemanship, combined horse and horsemanship, region, National Championship (Ice’s third), AHA high point Half-Arabian, and mileage awards.

There is more to Ice’s story. The pair finished 23rd in the grueling 100 mile Tevis Cup endurance ride, where temperatures reached 112ºF (44C) in the canyons during the ride, in July of 2013 – a feat they achieved in 2011 when they also won NATRC’s President’s Cup.

All Wolgram can do is beam, shake his head, and say, “I’ve never had a horse like Ice!”

Awesomes Fire N Ice is by the arabian stallion Awesome Knight (Bask Knight x NZ Tabarrok) and out of the quarter horse mare Come on Cotton. 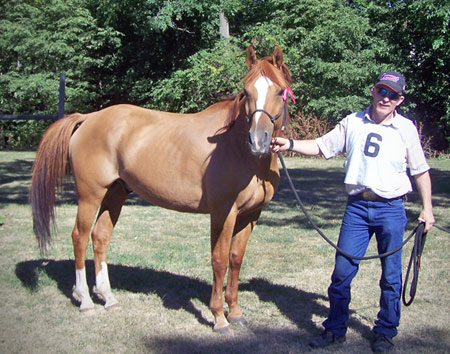