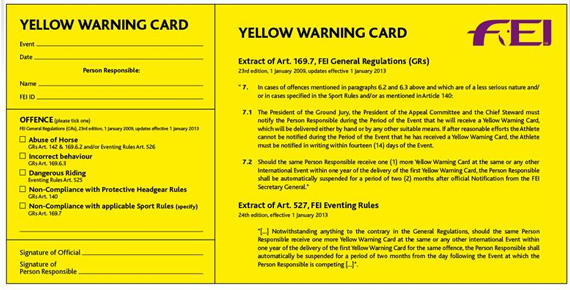 The yellow-carding of a rugby or football player is, in my view, a sporting spectacle in itself.

It’s the sense of anticipation that draws me. One can sense 30,000 bottoms sliding forward on their stadium seats as the referee summons a player after some egregious sin.

It is clear what’s coming. The referee is strutting and looking especially officious by this stage.

The player receives a brief dressing down and the referee, in a grand flourish, reaches for his pocket and pulls out the yellow card, or possibly even a red card.

The FEI has a yellow-card system, too. However, their use does not generate anything like the same drama and spectacle.

In equestrian sport, the yellow card is essentially a small yellow form which is printed out and given to the offending rider by the president of the ground jury at an event. No drama. No theatrics. That, my friends, is the FEI way.

The yellow card is a bit like demerit points accrued through driving infringements. Get too many and you lose your licence.

In the case of FEI yellow cards, collecting two in the space of a year will result in a two-month suspension. The bulk of offences fall under the categories of dangerous riding, horse abuse or incorrect behaviour.

But there are a couple of interesting aspects to the use of yellow cards.

First, competitors might be a little surprised to find what cardinal sins might result in the head of the ground jury showing up with his or her printed yellow form.

First of all, we know from the recent King’s Cup 120km endurance race in Bahrain, that having a member of your support crew leap from their pickup truck and strop your mount around the rump in an apparent bid to get it moving faster is definitely a yellow-card offence.

One can only imagine the outrage in the ground jury tent as the printer whirred into life and spat out the yellow form.

For the record, the rider, Sheikh Mohammed Bin Mubarak Al Khalifa, also received a fine of 500 Swiss francs. The Bahraini National Federation later suspended both the rider and the groom until the end of the endurance season.

Most competitors, one imagines, do their best for the welfare of their mounts and would be horrified to find themselves on the receiving end of a printed yellow FEI form.

Well, a moment of inattention, and a hint of obstinacy, and it could happen. The FEI last year made failing to wear properly fastened  protective headgear in any discipline on the showgrounds of an event a yellow-card offence if a rider failed to address the issue when asked by a ground official.

A few exceptions apply, such as dressage riders actually competing, or heading to or from the warm-up area or competition arena from the stables just prior to competing, when they can wear their top hat or bowler hat. But pretty much anywhere else on the showgrounds, that hard-hat must be worn.

So, let’s recap on what we’ve gleaned so far. Walloping a tired horse in an incident that casts the sport in a very poor light. Yellow card. Forget to fasten your chinstrap and get a little stroppy when an official points it out. Yellow card.

I do not for one minute question the earnest desire of the FEI to ensure that all riders wear their helmets properly fastened whenever possible. However, beating a tired horse to encourage it to go faster is first and foremost a horse welfare issue, with a real reputational risk for the sport.

While the death or serious injury of a rider through an unfastened helmet is also not ideal for the reputation of any FEI discipline, it is hard to see the two in the same light. Helmet use, after all,  carries a strong element of personal responsibility,  and ultimately has no bearing on horse welfare, which the FEI repeatedly assures us is paramount.

Which brings us to the second issue in relation to yellow cards. It would seem that one ream would last the FEI for a good few years in the sport of endurance.

Until the 100-mile President’s Cup ride in Abu Dhabi on February 15, when six yellow card were handed out, there had been only 10 in endurance globally in the past 12 months.

And in the FEI’s Group VII cluster of nations, where much of the recent attention on wider welfare concerns has been centred, the yellow card handed to Al Khalifa was the first at an FEI endurance ride in that grouping in 11 months.

By contrast, the use of yellow cards is far more common in other disciplines – 130 in eventing over the same period.

Eventing riders around the globe who have earned a yellow card might well feel aggrieved that, in other equestrian disciplines, and in other parts of the world, their rarity just about qualifies them as a valuable collectible item.

We can presume that the Abu Dhabi ride that resulted in the card-fest was not out of the ordinary. In other words, it almost certainly followed in the mould of most other major endurance events in the Middle East.

Perhaps the organisers and the FEI were finally reacting to global pressure to take action against rule-breakers in Middle East endurance racing?

Representatives of intelligence services company, Quest, owned by Lord Stevens, a former head of London’s Metropolitan Police, were on hand, as was the FEI’s endurance director, Ian Williams. This, one presumes, was a clear show of support for officials.

Is this the first step in a clampdown to get greater levels of compliance?

Perhaps so, but it will be interesting to see whether the Group VII nations respond in an encouraging manner. Forgive me for having doubts.

The events in the President’s Cup might even accelerate this trend.

The efforts of the FEI to tighten up endurance rules have been well publicised, and nations will gather late in April to finalise changes.

The FEI was urged into action last year following growing unease voiced by some national federations over concerning fracture rates and the high level of doping infractions dealt with by the FEI Tribunal, centred on Dubai, Bahrain and Qatar.

The FEI organised a round-table summit and appointed a planning group, which is now finalising its proposals after a meeting of interested member-nations in Lausanne, Switzerland, earlier this month. Unfortunately, no endurance representatives from FEI Group VII nations – of which Dubai, Qatar and Bahrain are members – attended.

Belgian gun-slinger Pierre Arnould, unafraid to fire off a few shots in the endurance debate, noted that nations and officials had gathered to discuss a problem centered on a particular region, yet those nations had not turned up. All the debate and change in regulations might ultimately prove useless, he warned.

Just how the cards play out from here is uncertain. Will Group VII embrace change or become an outcast in the world of endurance?

The stand taken by officials at the President’s Cup is to be applauded, but the road-map to global unity in endurance still looks more like an obstacle course.