Their bodies were placed in a zig-zag, the head of one horse placed on the chest of the next. Where did they come from and how did they come to be buried in northeastern France?

Archaeologists at first suspected the skeletal remains of the 40 horses may have dated from the Napoleonic era or perhaps World War 1. 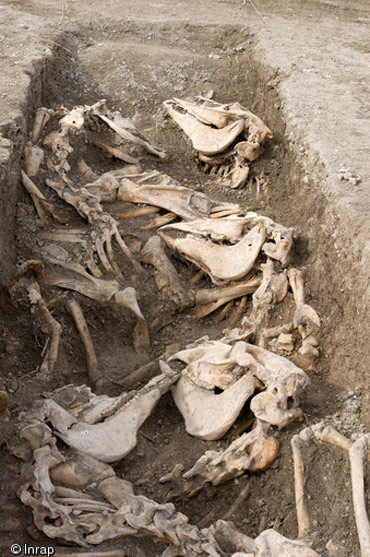 Now, the experts with France’s National Institute for Preventive Archaeological Research (INRAP) believe the animals may have been buried at the site of Bar-sur-Aube during World War 2.

INRAP archaeologists conducted a dig late in 2013, prior to the building of a new road and housing subdivision in the city. The modern town was once the ancient Gallo-Roman city of Segessera.

The aim of archaeologists was to verify the presence of the Agrippa, the eastern branch of a finger of ocean known to have existed in Roman times.

However, what they found was the 45-metre zig-zag trench containing 40 horse carcasses.

Twelve of them were thoroughly researched in two 12-metre segments, with archaeologists noting that they had been arranged one after the other, the head of each horse resting on the breast of the one beside.

The care taken to place the animals had shown considerable respect, the archaeologists said. The animals’ builds were suggestive of draught horses.

All had clearly been buried in a short time period. Some still had their horseshoes. Some had been killed with a blow behind the ear. The only artifacts collected in the trenches were the horseshoes and a harness buckle.

Initially, the archaeologists suspected they were casualties of the Battle of Bar-sur-Aube, held on February 27, 1814, during the Napoleonic Wars, in which 400 horses under the French were lost in a single assault against the Russian defences.

A second hypothesis was based on the presence in Bar-sur-Aube of the headquarters of Marshal Joffre in 1914. Injured horses were known to have been treated just a few tens of kilometers to the north at a Blue Cross veterinary hospital. 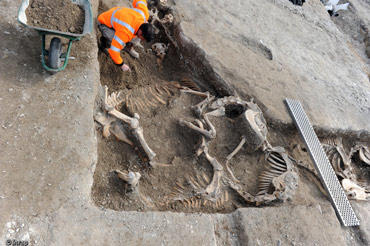 But, after an extensive literature search, the study of bones and analyzing landfill conditions, the experts favour a third hypothesis – that the trenches were the work of civil defence personnel during World War 2 and were initially used as part of the town’s defences.

The site requisition of horses by the occupation troops were known to have occurred in 1940-41. Further, the presence of a German veterinarian hospital in Bar-sur-Aube was recorded at the time.

The injuries suffered by the horses do not correspond with the aftermath of a bombing or point to euthanasia of the entire 40, but did point to fire, probably from an incendiary device.

No inhabitants of the area remembered such an incident, but in the last days of the German occupation, the civilian population of Bar-sur-Aube suffered many challenges. 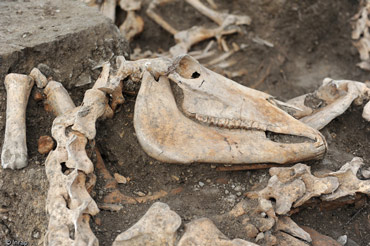 The archaeologists also found evidence of an old path from the Augustan period, shortly after the Roman Conquest. The use of the track as late as the Middle Ages was confirmed by the presence of many horseshoes torn and abandoned in deep ruts.

“The study of iron and ceramic shards found in the furrows by the wheels of the last teams confirms a sustainable use of this route,” the archaeologists reported.