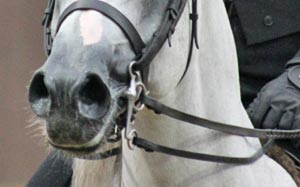 German researchers have cast a light on rein tension during dressage tests, and its relationship to rideability scores given by judges.

Consistency of rein tension was an important factor for judges in deriving rideability scores, the evidence showed.

Uta König von Borstel and Chantal Glißman, from the Department of Animal Science at the University of Göttingen, said rideability – the ease and comfort with which a horse can be ridden – was considered to be one of the most important traits in riding horses.

However, at present, rideability was evaluated rather subjectively in breeding horse performance tests, they said.

The pair, whose findings have been published in the open-access journal, PLoS ONE, set out to evaluate the role that horse behaviour, as well as the degree and quality of rein tension, might play in judges’ evaluation of horses’ rideability.

A total of 33 mares and 13 stallions across three different German testing stations were observed twice during their performance test dressage training.

During these on-station performance tests, horses are trained to be ridden in dressage and show-jumping and are evaluated for the basic gaits, jumping ability, rideability and personality traits, which are categorized as character, temperament, willingness to work, and, in the case of stallions, constitution.

During these rides, rein tension was measured continuously, and the frequency of behaviour patterns such as head-tossing, tail swishing, and snorting were recorded.

Analysis of the material gathered showed that rideability scores dropped with increasing average rein tension, with higher maximum rein tension, and in rides where variability in rein tension was found to be greater. 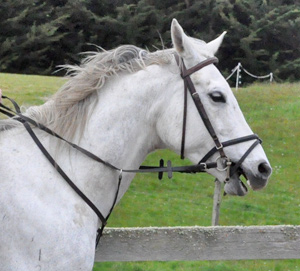 “These results indicate that quantity and consistency of rein tension is either directly or indirectly an important factor for judges to derive rideability scores,” König von Borstel and Glißman concluded.

Measuring rein tension along with behaviour observations might ultimately be used to make the assessment of rideability more impartial, they suggested.

The pair said although the level and quality of prior training can considerably influence rideability, during performance tests judges aimed at assessing the horses’ innate aptitude rather than the level of rideability achieved by training.

“Besides the rider’s legs, seat and in some cases the voice, the reins are one of the main means of communication between rider and horse, and it is thus expected that the horse’s reaction to rider’s cues via these different channels largely determines its rideablity.”

Rideability, they said, was rated one of the most important traits by both riders and breeders of various riding-horse breeds. Breed associations went to great efforts to evaluate it, with external, independent test-riders hired for each performance test to ride and evaluate the horses under saddle.

However, it was a complex trait and its evaluation subjective.

They argued that more objective assessment methods could greatly improve the evaluation of rideability, ultimately enhancing genetic progress in this trait.

The researchers found that, with the exception of bucking, horses’ behaviour was considerably influenced either by the riders’ behaviour and/or rein tension parameters.

In particular, the rider’s use of legs and whip influenced a large number of horses’ behaviour patterns.

Also, the more often horses tossed their head, the more likely they were to show a horse-induced change in gait and to tail-swish.

The researchers, in discussing their research, said rideability, temperament, character and willingness-to-work were compound traits with rather vague definitions, each including a large variety of different behaviour patterns.

They said they had tried to shed light on some general relationships between rideability and personality trait scores on the one hand and specific behaviour patterns and rein tension parameters on the other hand.

“Most riding theories request a steady but light contact between the horse’s mouth and the rider’s hand via the reins. Also, according to the guidelines, as well as a survey, rideability is considered by performance test judges to be partially determined by the intensity and consistency of the rein contact.

“Thus, the relationships between rein tension parameters detected in the present study were expected, and they indicate that performance test judges apparently indeed pay attention to signs indicative of the quality and intensity of rein tension.

“On the other hand, the rather strong relationships between rein tension and rideability scores are also surprising as riders and judges do not always seem to be particularly good in judging their own rein tension or in agreeing on the lightness of riders’ aids, respectively.”

“The vague definitions of very complex traits do not allow for objective and transparent evaluations.

“Although performance tests are intended to solely evaluate the animals’ abilities, the present study supports common knowledge that riders considerably influence the horses’ traits. These findings highlight the importance that the rider’s actions need to be recorded, too.”

Recording such data would allow for both evaluation of the horse’s reaction to the rider’s aids as well as statistical corrections for the influence of the rider’s riding style when evaluating a horse’s rideability.

“Ultimately, such a revised evaluation system would allow breeders to make more informed decisions when selecting stallions for their mares based on rideability aspects.”

The full study can he read here.